Slave Lake’s Junior baseball team got started earlier than expected last weekend. Coach Cody Stasow says he was first told the Heat wouldn’t be playing on the first weekend in the league; then he was asked if they could come to Edmonton on Sunday and play a couple. So that’s what happened, and the team found out how ready it wasn’t in the first game against the South Jasper Place Jays.
“I don’t know if the boys had some first game jitters or what,” says Stasow, “but we had way too many errors to keep count of, which wasted a great pitching performance from Cole Cooper and Brayden Stasow.”
The final score was 10 – 6 for the Jays. Randall Weber and Daniel Masur “both hit big doubles to keep the score close,” Stasow says.
The second game was against Fort Saskatchewan, and ended in a 2 – 1 win for Fort Sask.
“The boys fielded much better in the second game,” Stasow says. “But the bats went quiet when it really counted. We got a lot of hits, but couldn’t cash in with runners in scoring position. Randall Weber and Brandon Hermanson shared pitching duties.”
The roster for the Heat is still being finalized. For sure it will include returning players Brayden Stasow, Randall Weber, Dalton Masur, Ian Pollard, Nick Mulich, Mason Negraiff, and Luke Macaulay. Also new local players Cole Stasow, Ryan Adelman and Daniel Masur. Stasow expects a Barrhead player named Lee Worobec to also be part of the squad. Joining in when they can will be Austin Kuhn, Cole Cooper and Tyler Campbell.
Next up is a double-header this Sunday at Community Park in Edmonton, against a team named after the park. 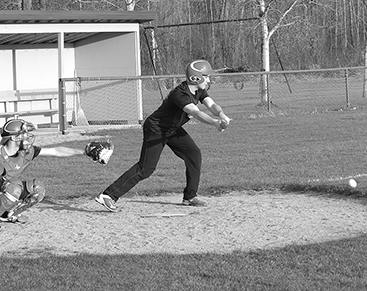