If it’s true that loving what you do is half the battle, Slave Lake caterer Greg Gramiak must have won it hands down. Because when it comes to enthusiasm for cooking (especially if a barbecue is involved), nobody comes close.
“Try this!” he’ll say, scraping a bit of flesh off a blackened pork roast that’s been sizzling for the past 20 hours in his back-yard slow-cooker, basted in what may or may not be a secret sauce. “Whattya think? Pretty good, eh?”
It certainly is. So is the grilled chicken beside it, smothered with chunks of green sweet pepper. Over all of it is sprinkled Gramiak’s home-made spice, which he markets separately under the brand ‘Matched.’
“It’s only got six ingredients,” he says. “It’s how you match them.” Also: “We took as much salt out of it as we could. Others put salt in as a filler.”
Grilled meat and home-made spice is a big part of the ‘Back to the Basics’ story (the name of his catering business). But far from the whole story.
“Try this!” says Gramiak, setting a cup of coffee in front of you.
It turns out the coffee was made from beans sent directly from Mexico, from a collective of small farms north of Puerto Vallarta. One of them is the father of a former bartender in town named Jorge, who Gramiak and his partner Maria befriended. One thing led to another…
“Do you like pickles? Try one of these.”
Mmmm. Very nice.
And yet another surprise: “Do you like kimchee? I make my own. Maria’s dad has it with everything.”
It is also a surprising to find out Back to the Basics has only existed for three years. But that’s just the formalized company; Gramiak had been catering ‘on the side,’ and developing a reputation around town for a dozen years before that. For the past year-and-a-half, he’s been running the Northern Lakes College cafeteria in Slave Lake, and catering out of there. His back-yard set up is “my laboratory.”
Along the way has been a lot of experimenting and a lot of learning that continues.
“Maria and I travel a lot,” he says. “Everywhere we travel we try to experience the local cuisine.”
Their curiosity has opened a lot of doors, as Gramiak illustrates through a series of anecdotes about visits to Grenada, Mexico, Barbados, Jamaica and Thailand. Often simply asking someone – a concierge, a taxi driver – led to wonderful invitations into homes and kitchens and glimpses into how certain local foods are prepared.
In Grenada, for example, Gramiak mentioned to an Air Canada rep that he wanted to learn how to cook. He and Maria were invited to her home, which turned out to be a pretty swanky address and treated to a lovely meal. Nothing fancy, he says, but really good.
Nothing fancy and really good is how Gramiak sees his own cooking, as indicated by the name of his company.
“It’s all back to the basics,” he says. “You can have a recipe that has 30 ingredients. I’ll put my food up against it any day.”
Or to put it another way: “The food industry has got so complicated. Don’t put a whole bunch of sh*t on it!”
Look for Back to the Basics food soon at a catered event near you. 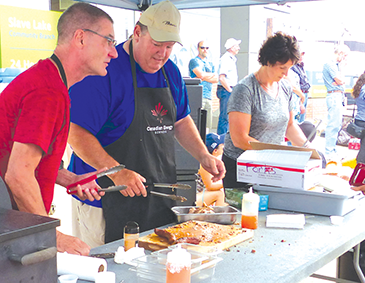 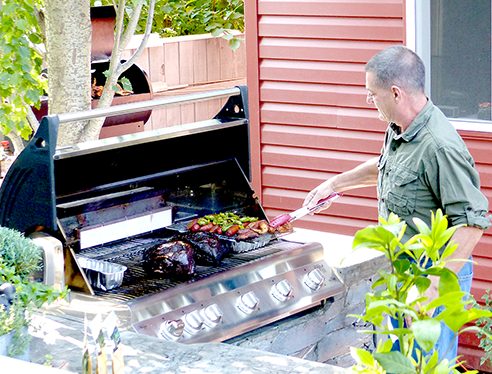 Greg working the grill in his backyard ‘laboratory’ last week.