Home Uncategorized King and Gramlich the newcomers to town council

Rebecca King – in her second attempt – and Shawn Gramlich join four incumbents to make up the new council of the Town of Slave Lake. The Oct. 16 vote saw Brice Ferguson as the leading vote-getter, with 859. Gramlich and King finished fourth and sixth, respectively, with 753 and 653 votes. Altogether, 1,089 people showed up to vote, a turnout in the 25 – 30 per cent range (nobody seems to know the number of eligible voters).
Speaking of the turnout, some had difficulty in proving their eligibility – not having made themselves aware of the requirements beforehand. Those included I.D. with proof of one’s residential address. A valid driver’s license covered it for many, but not all. Returning officer Lisa Russell says in some cases she was able to ‘vouch’ for a person (which the Local Authorities Election Act provides for), knowing where they lived when they didn’t have the usual proof. But in one case, somebody was turned away because all she had was a box number and nobody knew her. Russell said town staff helped by producing utility account information for people, but there was none in this case, nor any tax bill.
The votes were fairly evenly distributed over the seven candidates for six council positions. The odd man out was Khadim Hussain, who still did pretty well with 525 votes. Otherwise, Joy McGregor had 785 votes, Julie Brandle 765 and Darin Busk 730. Busk is entering his third term and Brandle her second. McGregor and Ferguson came on board in byelections during the past term.
They’ll all be sitting down with incumbent mayor Tyler Warman to figure out how to deal with the big challenge of making a budget for 2018. It starts with the swearing-in ceremony this week. After that they divvy up the council appointments to various boards, committees, commissions and authorities. Then it’s time to roll up the sleeves and get at it.
The town is facing some big challenges – most of them coming down to one thing: not enough money to do everything that is expected – or demanded. An aggravating factor in that scenario is a bigger-than-expected deficit, due to the M.D. recently deciding to pay less than it had been under the two inter-municipal cost-sharing agreements. For Warman, solving that is ‘job one,’ for the new council.
“I’m hoping we’ll be able to work with this new group (M.D. council) and move things forward,” he says. “And I think we can do that.”
Busk is onside with that, calling the agreements “a huge priority of mine.”
As for the election results on the town side, Warman is upbeat about that as well.
“I’m happy to see a combination of different depths of experience,” he says. “I think Shawn and Rebecca are going to add to that.”
Gramlich – not noted for lack of enthusiasm for the projects he undertakes – is keen as anything.
“I’m really happy to have been elected and looking forward to rolling up my sleeves and getting to work for our town,” he tells The Leader. “Speaking with the other councillors, there’s a lot of enthusiasm and I believe everyone is eager to get started.”
King says she’s “beyond excited,” about the chance to help shape the future of the town. “I will work hard to continue to gain the confidence of our residents,” she says, “and make myself available to help and advocate for them in any way I can.”
McGregor again has her work cut out for her, having been elected also to the High Prairie School Division Board of Trustees. She sees the two things as part of the same general effort of community improvement.
“I believe school community and town community should and can work hand in hand to benefit all involved,” she says.
Ferguson says he’s looking forward to getting back at it, and especially pushing the Devonshire Beach clean-up issue he put on the council agenda last term. 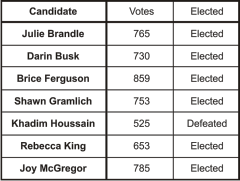