Richard Froese
For the Lakeside Leader

Lesser Slave Lake riding may be saved under the review of the Alberta Electoral Boundaries Commission.
An interim report indicates the commission has proposed to keep the LSL riding, along with its neighbour to the west.
Speaking of the report, commission chair Justice Myra Bielby says it, “strikes a balance between population numbers and public interest.”
It comes as good news for local municipal leaders, who feared the riding could be amalgamated or expanded as the rural population decreases. Town of High Prairie Mayor Linda Cox and Big Lakes County Reeve Ken Matthews are delighted with the proposal by the commission.
“Our riding hasn’t changed much,” says Cox, adding, “I recognize it is a large riding and difficult for one MLA to cover.”
(How it is proposed is Calling Lake gets added in the southeast corner, and some of the northern part gets taken away. The net increase in population isn’t much, but keeps Lesser Slave Lake within the 40 per cent variance allowed under its special status. The Athabasca-Redwater Riding – from which Calling Lake would be taken – disappears altogether. As proposed, Athabasca would now be part of the Fort McMurray – Lac La Biche riding.)
Matthews says the proposed changes don’t affect the county much. When the review was announced in January it made him a bit nervous.
“My concern is that the rural vote will be depleted,” he says. “We have very few rural votes now.”
Based on the 2016 federal census, the average population for Alberta’s 87 ridings was 46,698. Lesser Slave Lake’s population is 40 per cent under the average, at 27,818 residents. Central Peace – Notley, to the west, is a bit closer to the average at 33,471.
The association that represents rural municipalities (AAMD&C) submitted to the commission that existing variances between 25 per cent and 50 per cent below the provincial average could be addressed by maintaining both Dunvegan Central Peace-Notley and Lesser Slave Lake at their current size (presumably except as needed to meet the requirement that boundaries expand in the former to bring its population within the permitted maximum variance of 50 per cent below average.)
Other submissions proposed that the commission should exercise its discretion to move the boundaries so they contain populations much closer to the provincial average. Some said paving and electronic communications were factors making the special status of electoral divisions unnecessary.
There is still opportunity for public input on the boundary review. Interested citizens can speak to the commission on July 17 in Grande Prairie at the Sandman Hotel at 1:00 p.m. They are required to register in advance.
Albertans are also invited to file submissions on the interim report until July 8. Following this second round of public consultation, the commission will prepare its final report, which will be submitted to the Legislature by Oct. 31.
For more information, visit the website at ABebc.ca. 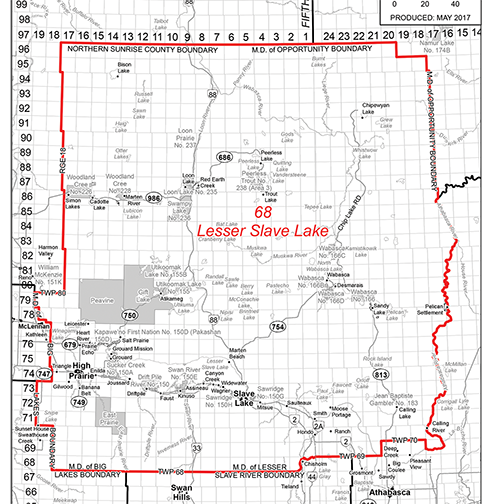 Lesser Slave Lake riding as proposed, with Calling Lake added and some territory cut off the top.