Who thinks of using an octopus as a main character in a childrens book? Local author Aaron Lehman, that’s who.
“I had seven books and I said that’s it! No more – seven is a lucky number,” says Lehman. “But those are only for the older kids, I had nothing for the little ones. So I thought ‘well, I could make a picture book’ – so I did.”
Opie the Octopus tells the story of Opie who isn’t too keen on his appearance. According to Lehman, the aim of the book is to help wee-ones accept their looks that they might not be fond of.
“It was quite difficult to make,” he says. “You have to limit any script and it has to be eye catching because of kids’ short attention span!”
Lehman adds, “It’s a great book for preschoolers and early readers – it makes for a good bedroom story.”
The Leader profiled Lehman in 2016 and asked him then if he had anything in the works, his answer back then was no; however shortly after our interview a light bulb light up, as it were.
“In November of last year it kind of came to me,” he chuckles. “It didn’t take a long time to write, a bit to edit but the idea came pretty quick.”
As mentioned above, the motivation behind the children’s book was because Lehman felt he had to fill a void.
“An octopus isn’t your usual animal character – it’s different,” he says. “Young readers can learn something from this book; they’re going to learn about numbers and about accepting themselves and their differences.”
In a nutshell, without giving away too much of the story, Opie starts off asking his mother why he looks the way he does and throughout the book he and his mom go through why his friends look the way they do.
“Sometimes kids don’t like the way they are,” says Lehman. “Be it their skin, hair or this and that. Opie doesn’t like himself in the beginning but by the end it isn’t that bad after all.”
Lehman will be selling Opie the Octopus along with his other seven books at various upcoming markets.
“I’ll be at all the usual places,” he says. “Main Street Crafters market, All Seasons Market and the Farmers Market.”
It’s $15.00 per book, which includes a separate colouring page full of Opie and his friends.
“Nicole Krikrun designed it,” says Lehman. “I’m very happy with it and the book. How it does? I don’t know but I’m happy.”
To see the rest of Lehman’s books, visit aaronalehman.wordpress.com. 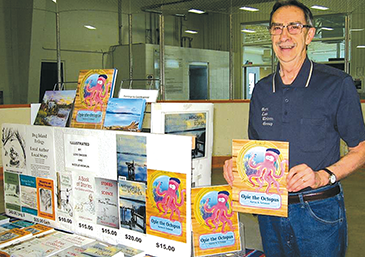 Aaron Lehman at the launch of his new children’s book ‘Opie the Octopus’ on April 15, 2017 at the All Seasons Market at the Slave Lake multi-rec centre.