Lee Tanghe, head coach of the Slave Lake Boxing Club, update The Leader last week on what’s been happening in his neck of the woods lately.
“We want to Pocatello Idaho and Carl Knight boxed against the Utah state champ in the 119-pound junior C divison,” he says. “He (Knight) won by unanimous decision and won the Idaho golden gloves title.”
Unfortunately, things didn’t go as smoothly for Knight during his next bout.
“We moved up to the 126-pound division against Victor Rodriguez from Idaho and I stopped the fight after the first round due to Carl getting an injury – popped his shoulder out.”
Tanghe took Knight along with four other boxers from across Alberta down south to compete.
The Slave Lake club will be sending two of its own to nationals this year which are being held out east in Quebec. The two lads in question are Knight and Kayden Bjornson.
“Last year they had the chance to go,” says Tanghe. “I didn’t think they were ready, but this year they definitely are.” 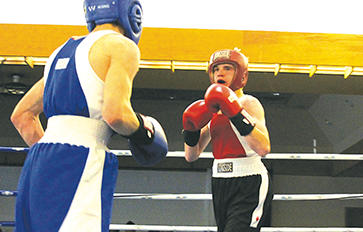 Pictured above is Carl Knight (red) competing in the Golden Gloves Boxing Tournament in Slave Lake back in 2016.