Home Sports Local boxers compete at provincials; one moves on to nats

Carl Knight at nationals this week

Three members of the Slave Lake Boxing Club competed at a provincial championship card in Edmonton last month, with one advancing to the nationals.

The most successful of the trio was Carl Knight, who at 16 years of age is compiling quite a record for an amateur fighter.

His first opponent at the Feb. 17 and 18 provincials was Fausto Santoro of Edmonton, in the Youth 132 lb. division. Knight won by unanimous decision.

“He made it closer than it should have been,” Tanghe says.

Moving from there directly into the final against Kyle Oliver of Lethbridge, Knight had a tougher match on his hands. Oliver is the defending national champion at that weight class. Tanghe says Knight fought a very good first round “sticking and moving,” and winning on points.

In the second round Knight tried something different and it didn’t work.

“He started standing in front of him and tried to slug it out with him,” Tanghe says. “He lost the second and third rounds, but he did pretty well.”

Because Alberta is sending two boxers from the weight class to the nationals, which are being hosted in Edmonton this week, Knight as the silver medalist got the nod. The tournament starts on March 28, at the Radisson Hotel.

Humberto Espinoza boxed in the 126 lb. Jr. ‘B’ division at the provincials. The 13-year-old went up against a boxer named Tristan out of Drayton Valley and pretty much had his way with him.

“The ref stopped it in the second round,” Tanghe says. “Humberto could have stopped the kid in the first.”

It was the fourth fight for Espinoza.

The third of the Slave Lakers to lace up the gloves in the provincial card was Jericho Aringo, a 17-year-old in his first-ever competitive bout. Fighting in the 141 lbs class against Bryton Cardinal of Edmonton, Aringo lost by unanimous decision.

“It was a good fight,” Tanghe says. “Jericho ran out of gas. Nerves got the best of him.”

More recently, Espinoza fought in a card at the Cougar Club in Edmonton. He took on a boxer named Joshua from Edmonton.

“It was very close,” Tanghe says. “Humberto won the first round. The second was really close, but they gave it to Joshua. He lost by split decision.”

In other boxing club news, Tanghe says attendance has been up and down, with 12 – 20 people attending the Monday and Wednesday workouts. The club is losing its downtown space and will be moving back into one of the school gyms. Tanghe is considering taking a team to a card in Idaho in April and another one later in the month in Grande Prairie. The club has been invited to take part in another in South Dakota in May, and will definitely be going to Las Vegas in early June for a big tournament. 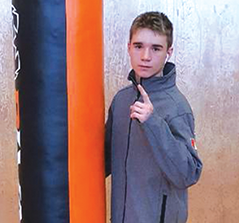 Carl Knight competes in the provincial championships in Edmonton this weekend. 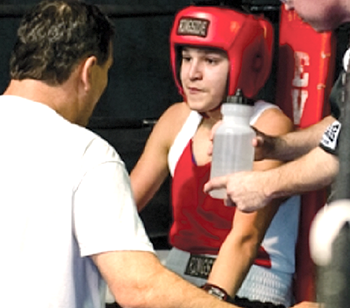 Humberto Espinoza gets a pep talk from his coach Lee Tanghe.