As many of you know, some of the local Cadets headed across the pond last month to France and attended the 100th anniversary of Vimy Ridge. The Leader had the chance to sit down with a few who made the trek to see how it all went.
“It was really interesting!” says Brandon McGee. “It was amazing to go there and see it. It makes you realize that 100-years-ago fellow Canadians weren’t there for a leisure stroll like we were, but they were fighting for their lives and ours. It was remarkable.”
According to fellow cadet Jordan Nahamko, the trip as a whole was the sort of thing that leaves a lasting impression in ones mind.
“It gives you a lot of perspective,” he says. “It gives you an idea on what Canada went through and how they fought for something they believed was right.”
Aside from visiting the Vimy Ridge monument, the group visited other war sites, including Juno Beach and the Beaumont-Hamel Newfoundland Memorial.
“I used to take a lot of things for granted,” says McGee. “But, seeing those places made me think that so much work was put in by Canadians just for our basic freedom. It was a much better experience than I expected. All young people should visit because it gives you a different outlook.”
Captain Dave Perkinson says it was a great opportunity for the cadets to expand their knowledge about Canada’s involvement in the war.
“I don’t think anyone left there without a new understanding of those historical events,” he says. “It’s so different than just reading it in a textbook – to stand there and to be where it actually took place – it’s a surreal feeling.”
Perkinson adds, “When we were leaving Vimy, the people in the surrounding village all had Canadian flags hanging up. It was amazing to see that.” 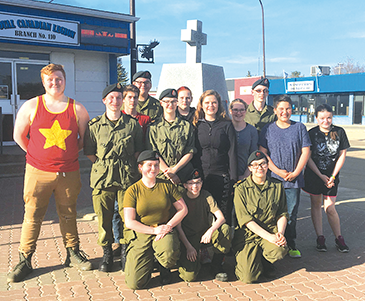