Home News Local firefighters spend up to 37 days helping out in B.C.

All sorts of people from all over Canada and the world are helping fight wildfires in British Columbia this year. They include several members of the Lesser Slave Lake Regional Fire Service, who spent up to 37 days recently in the area of 150-Mile House.
Ryan Coutts and Logan Skahl were part of a crew that arrived in the hamlet of Miocene, northeast of Williams Lake, shortly after a fire had run through. There were all kinds of hot spots around, and their job was to set up sprinklers for structure protection and dousing hot spots. The did the same thing in a place called Pioneer Crescent, which had embers falling on it.
“We had some saves,” says Coutts.
For example, a big spruce tree had fallen next to a house and when they discovered it, its butt end was on fire and would likely have ended up igniting the house.
Coutts says in Miocene they were the first structure protection force on the scene; before that it had just been B.C. wildfire personnel, who estimated only three structures had been lost.
“We counted 29,” he says.
Other communities worked on by Slave Lake crews were Alexis Creek and Riske Creek, west of Williams Lake. One of the Slave Lake sprinkler trailers is still out in that country, manned by another crew.
“I was there (Riske Creek),” says Skahl. “The second time was way worse.”
Lots more crews from all over came into the battle while the Slave Lakers were there. Nearly every province in Canada has sent help, as well as a few states. Australians are there as well. The Canadian army is helping out too, manning roadblocks and such, which the RCMP was overwhelmed with, Coutts says.
In spite of all the help, Coutts figures the crews will be engaged until winter comes.
Besides Coutts and Skahl, local firefighters who spent time in B.C. were Patrick McConnell, Jake Zacharias, Lee Green, Kim Romaniuk, Alex Pavcek, Shane Whiteford, Dustin Seghers (from Kinuso) and Thomas Lougheed. 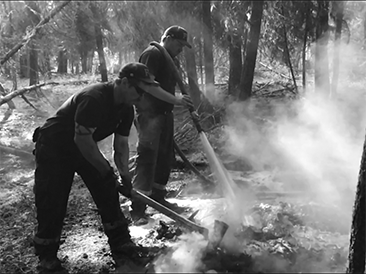