Kimberly Poitras certainly kept busy this summer, she qualified to represent Alberta on the Junior ‘A’ provincial team for synchronized swimming.

Poitras trained in Calgary for three weeks then she competed at the Synchro Youth Nation Competition (SYNC) in Toronto at the Pan Am Sports Centre where she received two bronze medals for her technical routine and freestyle routines.

Poitras came home and dove right into her speed swimming competitive season. She competed in two regular season meets in Lloydminster and Camrose receiving 12 golds and the gold aggregate for the top ranked female at both meets. Competing at regionals receiving six gold medals and six personal bests breaking the provincial 800m freestyle record that she set last year.

Poitras was just as successful at provincials receiving another six gold metals and three provincial records. She broke the 800m record again by 10 seconds with a crowed of her family and friends cheering her on.Poitras also broke the record in the mixed team 200m 13-14 freestyle.

With speed swimming over Poitras is returning to her passion of synchronized swimming. She will also be making a move to Calgary to join the world renown, elite Calgary Aquabella’s.

The Aquabella’s have a long history of being national champions and sending athletes to national and olympic teams year after year.

Poitras is in her final year of 13-15 and has her sights set on representing Canada on the national team this coming summer. She will be living with a teammate and be attending the Edge Sports Academy on a scholarship. 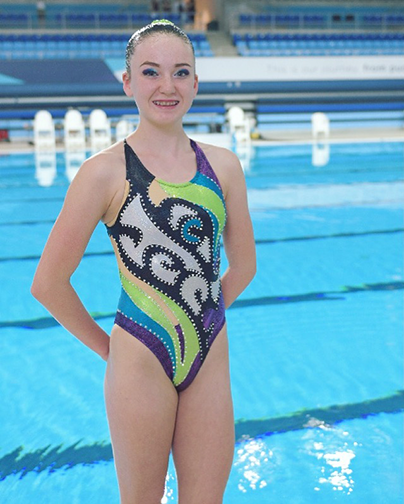 Kimberly Poitras done up in her synchronized swimming makeup. 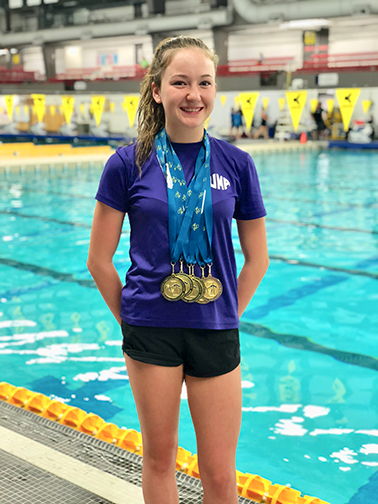 Poitras sporting her gold metals from the season.