On Saturday, March 10, staff members from Northern Haven Support Society travelled to Edmonton to participate in the MeToo Rally: Moving Beyond the Hashtag at the Alberta Legislature building.

The MeToo Rally: Moving Beyond the Hashtag was held in honour of International Women’s Day, to rally in support of the strong survivors, who added their voices to “#metoo” and to demonstrate that any act of harassment or assault is wrong.

“#metoo” went viral in 2017, as a hashtag used on social media to help demonstrate the widespread prevalence of sexual assault and harassment.

The phrase was first used in this context by Tarana Burke, an American civil rights activist.

The hashtag was popularized by celebrity Alyssa Milano,when she encouraged women to tweet it, to give people a sense of the importance of the problem. Since then, the phrase has been posted online millions of times, often with an accompanying personal story of sexual harassment or assault.

“She has since moved on in her work with the government but we’ve kept in touch,” said Ferguson.

She said Raworth has become heavily involved with the “#metoo” movement and speaking out against sexual harassment and assault over the past year.

“We want to make it clear that Northern Haven Support Society believes survivors and because we believe strongly that the culture that allows for sexual harassment and assault needs to change,” said Ferguson.“We see the result of systematic sexism every day working with women experiencing and leaving domestic abuse and family violence.

“We want to see change at the core, including increased education for those working in the justice system, to prevent the re-victimizing of survivors who are strong enough to tell their stories” added that the society is looking forward to next year’s rally. 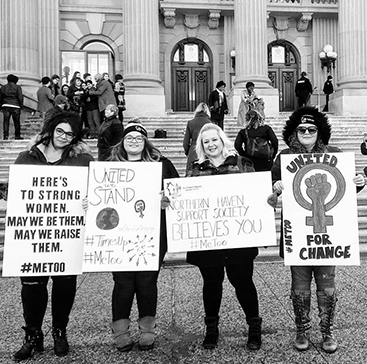 Rhonda, Laurie, Shelly May Ferguson and Bernadette from Northern Haven Support Society, at the MeToo Rally: Moving Beyond the Hashtag at the Alberta Legislature building on March 10.