Community member Debra Strickland’ s granddaughter, gets the opportunity of a lifetime as she embarks on the next chapter of her life.

Katrina Robinson will be attending Adrian College in Michigan on a hockey scholarship.

Robinson says the liberal arts school is 45 minutes west of Detroit Michigan. She says Adrian is also home to a division one women’s hockey team, the Bulldogs, which is second in the nation.

This is the team Robinson will be playing for.

Robinson explains the campus at Adrian College isn’t very big compared to other schools, so it is the perfect size for her.

Robinson says she will be studying criminal justice or sports management during her time at Adrian.

How she got discovered was actually by a scout in Sherwood Park Alta. who had told a division one head coach at Adrian College about her.

“He watched me play, which resulted in Adrian being interested.”

Robinson started playing hockey for the KC Knights in Edmonton at age four. Ever since then it has been a part of her life, and she exclaims she does not plan on letting it go anytime soon. Although Robinson received a scholarship it was only partial, not a full ride.

Robinson plans to hold a different fundraiser every month for school, so her parents don’t have to fork over a bunch of money.

“I am so grateful to have them in my life,” she says. “They push me as hard as they can to see me succeed and I couldn’t do it without them.”

Robinson had a fundraiser last week put together by her grandma. At the Community Christian Centre Church in Slave Lake.

“She did a fantastic job.” “I was really impressed.”

Strickland had put together an auction, door prizes and live music.

“I am extremely thankful,”Robinson says. “The money raised is going to help me so much.”

Robinson was born in the Slave Lake hospital on December 19, 2000. Her parents lived in Kinuso at the time, but she moved to Edmonton with her mother before her first birthday.

“There is not much to me, quite simple really.” “I’m on the ice or in the workout room, sleep and repeat,” says Robinson.

“I am more nervous than scared; my family is quite far away, which is going to be extremely hard to get used to.” 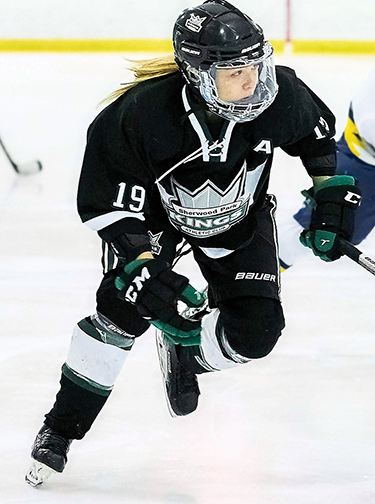