Home Uncategorized Long-distance cyclists pass through, have a shower

Two cyclists from Michigan pulled into Slave Lake recently, just in time to get their picture taken by a roving reporter. Austin Healy and David Bere have been on the road for 13 months, Bere says, having started in May of last year in St. Ignace Michigan. They first pedaled across Canada to Vancouver, then south around the Western States for the winter months, then north as far as Fort St. John B.C. and are making their way back east, staying as far north as they can for as long as they can.
‘We’re headed for Thompson Manitoba,” says Healy. “We like trees.”
Surprisingly, the pair did not arrive in Slave Lake via Hwy. 2 from the west, but down Hwy. 88 from the north. Somehow they managed to get across the Peace River without entering the town of Peace River, then got across to 88 on Hwy. 986.
The reason they prefer travelling through forests?
‘We use hammocks,” says Bere. “We don’t have tents.”
They don’t shower very often, either. Bere says before a fellow in the Woodland Cree First Nation gave them a place to stay, their last shower had been 3½ weeks earlier, in Prince George. Their clothing was showing distinct evidence of a lack of laundering as well, but it did not seem to have dampened their spirits.
Healy and Bere were in luck as far as accommodation goes in Slave Lake: they were being put up for the night by a local couple they met through the website called warmshowers.org, a forum which connects travelling cyclists with people interested in hosting them. 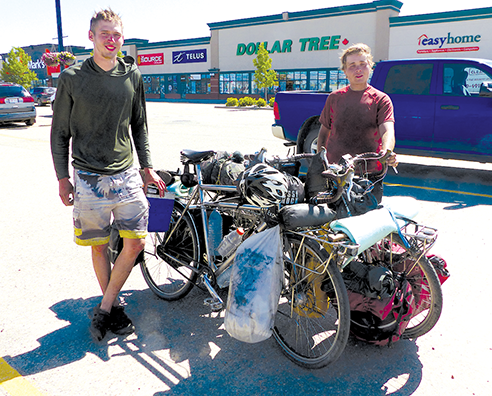 Austin Healy and David Bere, 13-months on the road and looking it. Bere built the bikes himself.