Slave Lake Physiotherapy, an independent clinic, has been operating for over two years in in a fairly prominent location in downtown Slave Lake. But – and this is a pretty familiar story – it seems a lot of people still don’t know it exists.

That’s at least the impression of Abhijit ‘Abhi’ Dhane, the proprietor of the business. He’s also one of the three therapists who work at the clinic` – one full time and two part time.

“There are people driving to the city for treatment,” he says.

They might not do that if they knew SL Physio as of two or three weeks ago is now open much longer hours.

New services are being added as well. Dhane lists them: spinal manipulation, treatments for dizziness and ‘dry-needling’ are three of them.

Dry-needling?
“Fine needles to poke the muscle to release the trigger points,” Dhane explains. “It’s only in our clinic. It’s very new.”
Laser treatment for pain management is another. Treatment for scoliosis is yet another and one that also isn’t available just anywhere, Dhane asserts.

Dhane says the idea for opening an independent physiotherapy clinic arose in the period after the 2011 wildfire disaster, when demand for services was perhaps higher and the ability of the government system to provide was certainly reduced.

“There were huge wait times,” he says. “So we give an alternative.”
Slave Lake Physiotherapy tries hard, Dhane says, “to live up to the expectation of same-day access. Our aim is to provide at least the first consultation on the same day.”

What the clinic further aims to do is provide all the advice the client needs to make his or her own decisions about their treatment.
“We don’t believe a patient should be dependent on the health care professional,” he says. “They should be in charge and we work hard to do that so they can manage it by themselves.”

Dhane says the clinic is set up to deal directly with insurance companies where that comes into play, so the client doesn’t have to face that particular hassle. That goes for WCB injuries as well as veterans and RCMP benefits, among others.

Slave Lake Physiotherapy is located on 2nd Ave. NW in downtown Slave Lake, in the old SAAN building, between the boxing club and Ta’s Asian Grill. 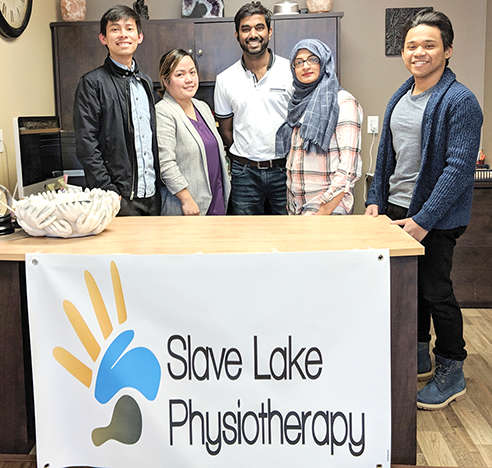