The Lesser Slave Regional Waste Centre has a new supervisor in Rob Craig.
Craig sat down for an interview with The Leader to speak about his new job as well other topics surrounding the landfill. He was joined by certified landfill operators Janise Cormier and Linda Saunders.
Craig first came in as landfill supervisor nearly seven months ago on July 5, 2017. His main role is to supervise the staff as well as the day to day operations of the site. He says his average day entails maintaining the yard, garbage cleanup, snow removal and sorting out materials.
Craig previously worked the oil patch. He first moved to Alberta in 1996 from Prince George, BC. He was working in the oil industry and living in Grande Prairie. He decided to come to the Lesser Slave Lake region because there was a lack of work in Grande Prairie.
“This is all new,” he says.
Craig says he likes the job because it is work and he works with a lot of great people. He feels that when everyone gets along and there is a team atmosphere it make a positive difference in a workplace.
Craig gave some examples of the difference between this job and his previous one. The landfill runs at a slower place than he was used too ad it is not a stressful job. The hours are not as long as he does not have to work 14 hour shifts. This job allows him to be home every night.
The transition from the oilfield to the landfill was a challenge for him. Craig says he had to re-learn a few skills, pointing primarily to computer skills. His biggest challenge was learning all the landfill policies, procedures and legislation.
“That would definitely be the toughest one,” he says.
Cormier explains that the biggest challenge the landfill as an operation has faced has been budget cuts. This occurred when GFL decided to take their business waste somewhere else. She says GFL found a cheaper rate. That loss resulted in a reduction of their budget by half she estimates.
This has had an effect. Cormier says some of the landfill’s wood was transported off site to be used for power generation by a third party but that is no longer financially possible.
Craig explains that he can’t make a decision on rates because that falls under the responsibility of the Lesser Slave Regional Waste Management Services Commission. He himself is not part of the commission but he can bring concerns forward to them.
Craig says if he had his way he would like to see more equipment at his disposal, such as, skid steer loaders and an industrial forklift. He would like to see a tire cages as well as somekind of structure to store electronics.
Craig feels the landfill should be open longer. Staff currently only work 32 hours a week. He would also like to see recycling more accessible. He thinks that most people do recycle but there is some fluctuation in participation. More people tend to recycle in the summer than in the winter and the most common item recycled is cardboard.
Craig would like to see more education on recycling. He gave the example of doing a pamphlet with information about what can and cannot be recycled and other such information. He has seen people throw out plastic toys, when those items could have actually been recycled.
Overall Craig think he has a good grip on his new job but still recognizes he has a lot to learn. He still has to go for a landfill certification course in May.
“I’m still learning quite a bit,” he says. 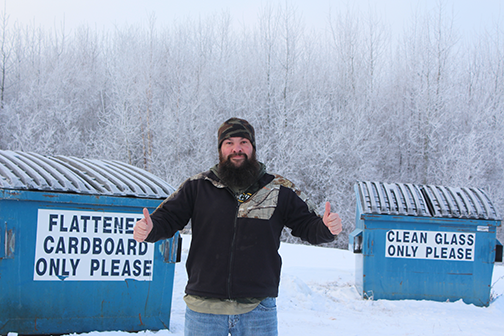