Home Uncategorized LSLBO report: Flying squirrel the only highlight from this week

Last week I chose not to write an article because I had nothing really to write about. Migration monitoring was over and although owl monitoring continued, it wasn’t producing much result.
From October 5th-11th I captured a paltry four northern saw-whet owls. Well, shows me for trying to wait another week to have more to write about… This week (Oct 12th-18th) I caught zero owls of any sort. All I caught was a northern flying squirrel, which although cute, is pretty much the worst thing to have turn up in a net.
So why no owls? Well, I think weather is a huge contributing factor, I wasn’t set at all on six of the last fourteen nights and even the nights I was set-up were still rather windy or/and drizzly. I really hope that once this storm system finally leaves us, I will get a surge of owl migration before the end of the season. At the very least, I hope to catch a boreal owl, since so far I haven’t seen or heard boo from them.
In lieu of writing about owls, I will write about flying squirrels. Back in September, on family owl night, I had a visitor ask about flying squirrels. This question didn’t come out of nowhere; it was asked because we have a big whiteboard in the boreal centre that has a running tally of the owls caught this season. On this board, I also have a tally for flying squirrels, which at the time was at one. This man asked me if that was a joke, or were flying squirrels a real thing? I assured him that they were, but I thought perhaps there were more people who didn’t know about flying squirrels.
There is no shame in having never seen or heard of a northern flying squirrel – they may just be one of the most elusive small mammals we have in Canada. Despite being found in forests all across the country and being nearly as common as red squirrels, they are seldom encountered because they are nocturnal. Like all nocturnal animals, they have large eyes and ears and an abundance of facial whiskers for getting around in the dark. They are a soft grey in colour with a clean white belly. Their most distinguishing feature though is the membrane, or patagium, that stretches from their front legs down to their back legs. This patagium is what allows them to ‘fly’ or rather glide from tree to tree, covering as much as fifty metres in a single leap.
Super cool sounding critter, right? They are; it is just unfortunate that my encounters with them are when they are tangled in my owl nets. Squirrels are tenacious, spirited little creatures and faced with an unseen force that holds them suspended in the air, they do the only thing they can think to do – squirm and chew at everything that is touching them. They work themselves through so many layers of net in their efforts and manage to create dozens of holes, and yet never get themselves free. They just get themselves very, very tangled. On top of being superbly tangled, squirrels also pack a mighty bite, so they have to be extracted wearing gloves. Fun times for a weary owl bander. 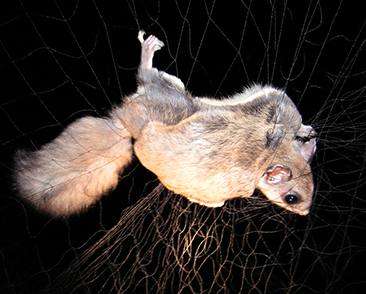 A northern flying squirrle tangled in the owl net and getting more tangled the harder it tries to escape. 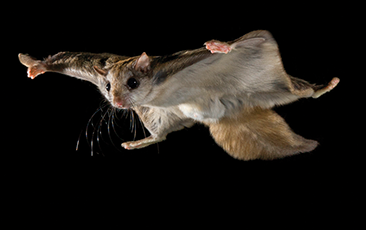