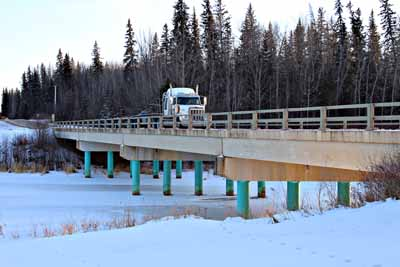 M.D. of Lesser Slave River bridges are taking a beating from heavy haul traffic in the winter. This is nothing new, but the M.D. is starting to take notice and worry about the liability and the costs piling up from that wear and tear.
Accordingly, M.D. transportation department director Bill Klassen had a report for council at its Feb. 22 meeting. It contained some eyebrow-raising material.
For example: Since the last time the Tollenaar Bridge was inspected in 2014, there has been a fivefold increase in log-haul traffic. The numbers Klassen had for council were 11,000 loads in 2014, as opposed to 58,000 anticipated this year – although those might not all be going over the same routes.
Further, although Alberta Transportation load-rates the bridge at 62 tonnes, the Resource Road hauling permits allow loads of up to 88 tonnes. As Klassen pointed out, that sort of weight may be appropriate on frozen roads, but the bridges don’t get stronger in the winter.
“I wanted you to know what’s going on, and it’s been going on for years,” Klassen said.
The M.D. is responsible for maintenance and replacement of the three bridges affected by the Resource Road hauling permits. The other two are over the Driftwood River and the Fawcett River. It would cost around $12 million to replace them.
Klassen said he’d been talking to people in government about the issue and hadn’t gotten very far.
“Nobody seems to be taking the cumulative impact into account,” he said.
Klassen’s report contained four recommendations:
1. Request an inspection and review of the load-rating analysis and a report on each bridge.
2. Request that Alberta Transportation update its system to reflect the weights they are approving for the three bridges.
3. Encourage the province to fund maintenance and repair or replacement on the three bridges.
4. Negotiate with the local forest products mills on funding upgrades, maintenance and replacement for the bridges in question.
Tollenaar Bridge – which crosses the Lesser Slave River north of the Mitsue Industrial Park – is due to be inspected in 2017 under the provincial program which sees bridges done every 39 months. It is due already for about $560,000 in upgrades, money the M.D. doesn’t have lying around.