A worn-out waterline in the north end of Slave Lake will be replaced this year, but only partly. After the M.D. of Lesser Slave River council turned down a request from the town to fund a major part of it, town council decided to abandon that section.
Last week town council got the details from town project manager Doug Baird: the waterline serving town and M.D. customers along the north end of Main St. is falling apart and needs to be replaced.
Under the circumstances (M.D. not paying its share), the recommendation to town council was different than it would have been.
The upshot: the town abandons responsibility for the old (almost 60 years) line north of Tamarack Rd. There are three town customers on that stretch; the new plan is to serve them from a new line that will run along Tamarack Rd. There are more M.D. customers that are being ill-served by the corroded old 4” Main St. line than town ones; what happens to them now appears to be an M.D. problem.
The reasoning behind M.D. council’s decision not to contribute to the upgrade (beyond $20,000) was not discussed in an open session of council on May 10. Likely it had a lot to do with the budget for 2017 having already been fixed, and money being tight. The letter from the M.D. informing the town of M.D. council’s decision said: “Council is interested in moving a line to northern areas of the M.D. in the neighbourhood at a time when there is a return on investment from development to warrant the capital expenditure sought.”
Baird made it clear in his report to town council last week that the preferred approach would be to put in a new pipe all the way up Main St. to the river. The existing 4” line, he said, is well past its due date. Due to corrosion it has to be flushed every couple of weeks.
Breaks are common and expensive to fix and the line’s capacity is reduced and not close to adequate for fire hydrant supply. There are two hydrants on it, but they offer “false security.” The line should have been replaced years ago, he said.
“The fire department knows they have to bring their own water with them because they’re not going get it out of the hydrants.”
The town had proposed a 50-50 split in the cost of the middle section of the project (which has five M.D. customers and three town customers) and that the M.D. cover 100 per cent of the cost north of the town/M.D. boundary. All told, that would have been about a $600,000 bill for the M.D.
With that off the table, the town will go to tender on the other sections of waterline installation. These are the ones from 10th St. (the ATCO corner) to Tamarack Rd, and from that intersection along Tamarack Rd. as far as 8th ST. NE.
Council passed a motion to go ahead with engineering and tendering on that basis. Included in the motion was the direction to investigate “alternate solutions,” to connect town customers north of Tamarack Rd. on Main St. Added to the motion by way of an amendment was the direction to inform by letter the M.D. and M.D. water customers in the affected area that “the town may be abandoning the line north of Tamarack Rd.”
Baird estimated a month before construction begins, and for it to last about six weeks. 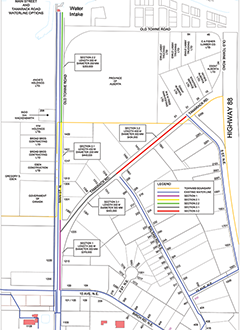