The Slave Lake & District Chamber of commerce president made the same pitch to M.D. council as she made to Slave Lake town council the week before. Francesca Giroux outlined the strategic plan of the organization, listed its events and programs and spoke about the difference they are making and hope to make in the region.
The main difference is this time Giroux asked the M.D. for $5,000.
“M.D. businesses are our members,” she said. “We want to increase our ability to bring people to the region with our events. We need money to promote our events.”
Speaking of the success of the Riverboat Daze Block Party, Giroux said, “we’ve had calls from all over the province,” about next year’s event, but again, “if we want bigger and better, we’re requesting some help.”
Councillor Brad Pearson asked about membership fees – if the Chamber had considered waiving the fee for first-timers. Giroux said the Chamber’s experience has been that it doesn’t work.
Councillor Jeff Commins said as a Chamber member for many years, his family business gets “quite a return from it.”
Reeve Murray Kerik said council would be discussing the funding request at budget time.

CAO Allan Winarski, in setting out the lay of the land for council, said budget preparation was the main focus for administration, in preparation for a two-day budget session with council Dec. 4 and 5. In connection with that, he asked for council’s approval to advertise those meetings as public meetings. Council passed a motion making it so.
Other than budget, Winarski said he’s still focused on developing the two agreements with the Town of Slave Lake. Nov. 28 is the date when the two councils were supposed to meet to hammer out the final details on the Fire Services and Inter-Municipal Agreements.
Because of all the time and effort needed for those agreements, “our own business has been gravely backlogged,” Winarski said. Once they are taken care of, he anticipates a shift of focus onto other things, including planned improvements to the development permit process.

Utilities manager Lyle Farris’s news was mostly good. The new reservoir above Widewater is working well, with one minor deficiency still to be dealt with. Land has been acquired (donated) for the new lift station in Smith. And there seems to be a decent chance of getting a grant to re-line the wastewater lagoons in Smith, which are showing signs of failure. Council directed administration to apply for a grant under the Water and Wastewater Partnership Program.
Councillor Brad Pearson again raised the issue of compliance in the South Shore.
“There could be some pumps running without grinders in our system,” he said.
There could also be some residents not connected at all. Council earlier set a deadline of next November for everyone to get connected.

Next up in the parade of reporting department heads was Bill Klassen. Some projects are finished, he said, some are underway and some aren’t going to get done this year. One of those is the repairs to the piece of the East Mitsue Road that the M.D. has just recently discovered it owns. Or more precisely, nobody owns, but now that it’s falling apart, somebody has to take responsibility for. It’s roughly from the highway to the pulp mill turn-off.
Smith and Flatbush painting is complete, Klassen said (referring to the libraries?) and hazardous trees have been removed from the Smith location. Renovations to the Slave Lake M.D. shop have also been wrapped up. Renovations to the Flatbush Complex appear to be ahead of schedule, Klassen said (but are also over budget).
As for the roofing job on the Slave Lake admin building – it was roaring and thumping and stinking as the meeting went on. They figure nine more days, Klassen said.
“The weather has been killing them,” he added, just as the freezing rain started to fall.

Another item in Klassen’s report was that a study of the drainage in the hamlet of Flatbush has kicked off. Survey work has been completed and more is to come. Expect to see it as an item proposed for the 2018 budget, Klassen told council.
“We want to make a concerted effort to address that,” he said.

Klassen’s report also included the little nugget that there have been “181 notifications from industry – quite an uptick from last year.”
Asked by councillor Sandra Melzer for clarification on this, Klassen explained that when industry undertakes something, such as the development of a well site, it notifies the M.D.

Councillor Pearson congratulated Klassen for all he and his department have been getting done. On the subject of winter road maintenance in particular, he said he’s been hearing comments from people in Slave Lake along the lines of: ‘Wow! We wish lived in the M.D.’
“That’s not what I’m hearing,” said councillor Becky Peiffer.
“I’ll be blunt,” said Klassen. “It’s very hard to please some people.”

Russ Jassman took his turn on the hot seat, reporting on various items in his purview. One was that the Ag Service Board decided to review its clubroot of canola policy, given an outbreak of that problem in St. Paul County. The Ag Fieldman did some research and her conclusion was that the policy was good enough as is. Several fields of canola were destroyed by the county in the St. Paul area this year, Jassman said.
Jassman also said tender packages are ready to go out for the facility operator jobs. This includes Canyon Creek arena, but bigger news about that was coming later in the meeting.
Jassman informed council a big pile of dirt is stored and ready to be shaped into a sliding hill at the complex in Widewater. The idea is to fence it for the time being for safety reasons. The Widewater Athletic Association has offered to contribute $10,000 to the cost of constructing the hill. This will presumably happen next year.

Board vacancies must be filled

Council heard there are several vacancies on boards that the M.D. is responsible for keeping filled. Two are on the weed and pest appeal panel, one is on the regional library board, two are on the Subdivision and Development Appeal Board and one (which must be a councillor) is on the Tri-Council’s Health Advocacy Committee.
Councillor Peiffer accepted appointment to the latter of these. Council heard Bob Chapotelle had applied to join the weed and pest panel (still leaving two vacancies and the others were outstanding.
“Canvas your communities,” urged Winarski. “Arm-twist. These have to be filled.”

Engaging with the public

Following a suggestion by councillor Pearson to create more opportunities for members of the public to engage with council at council meetings, a report had been prepared. It had three options: Status quo (meaning delegations can present to council after going through a process of applying, making it possible for people to walk in and speak their minds without notice and thirdly, to hold regular council meetings once per year in different communities.
“I like #3,” said reeve Kerik, starting things off. “I like the idea of going out to the communities so they have a chance to see us.”
Pearson stuck up for his original proposal, which was to create more time for people to speak to council at regular meetings.
Kerik: “I don’t want to make shortcuts for people who are too lazy to do it the right way.”
Commins: “I definitely want to stick with the delegation system.”
Esau: “When somebody comes through that door, it has nothing to do with the majority.”
Council passed a motion to go with Option #3, which means they’ll stick with the delegation system and hold one meeting a year in Smith, Flatbush and Widewater.

There’s a growing number of abandoned wells and other oil and gas installations in the M.D., with associated financial and environmental implications. Having heard about it at the recent rural municipalities conference, councillor Melzer asked if it could be added to the agenda for discussion.
“Do we want to investigate this?” she asked.
Councillor Pearson thinks not.
“It should be the province,” he said. “We’ve got enough on our plate.”
On the other hand, said councillor Commins, “it’s important we know where these things are.”
The report from CAO Winarski on the topic contained some good news. A new provincial program provides a credit to municipalities for the school portion of property taxes that they’ve had to submit on such abandoned properties.

The M.D. has built or assumed responsibility for several trails in and around its communities. Accordingly, the Rural Services Department had prepared a new policy on the inspection and maintenance of these assets. Presenting it, Russ Jassman said there would be a separate set of protocols in the policy for each of the three types – paved, wood (walkways) and mulch. As set out, he said, the work could be handled by current staff. Any more maintenance would trigger the need for another position.
But some additional expense is unavoidable. With two new paved paths to look after (in Smith and the M.D. portion of the trail from Slave Lake to Devonshire Beach), some attachments for the M.D. Kubota are needed, Jassman said, and will be budgeted for.
Council accepted the policy as presented. 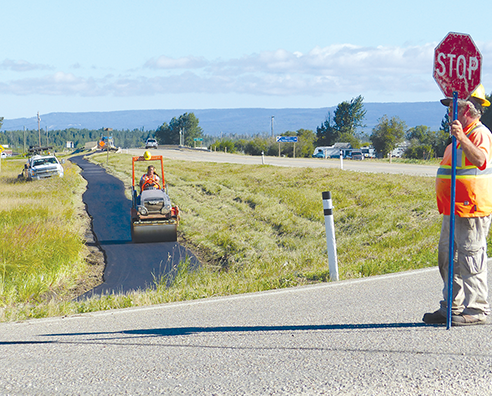 The M.D. portion of the trail to Devonshire Beach, being paved in August.

Councillor Melzer reported that Darren Fulmore was elected chairman at the recent ASB meeting, and Damond Stadnyk is vice-chair.
Further on the clubroot of canola situation, Melzer said there was some found in the M.D. this year, “but it didn’t reach the threshold for a notice to go out.”

Pearson reported that Darin Busk was elected chair, with Brice Ferguson vice chair. Requisitions to the two municipalities will stick at $100,000 for the coming year. Reserves are healthy.
On the big resurfacing project, “it has to go to the lowest bidder,” Pearson said, in order to qualify for the provincial grant.
The plan is to mill off 50 millimetres of the present surface and replace it with 60 millimetres of new asphalt.
Fencing the perimeter is also in the budget, Pearson said, to keep animals and people off the runway.

Commenting on the recent Alberta Association of Municipal Districts and Counties conference, Pearson noted that 42 per cent of the people elected to councils in October were first-timers.
“A lot of young people and a lot of women,” he said.
Another statistic he found interesting: “Seventeen per cent of Alberta’s population is rural, down from 21 per cent. We’re going to have to really scramble to keep our voice.”