Membrane issues in Smith
Drinking water quality issues in Smith were being dealt with, council heard. Water filtration membranes in the treatment plant were being looked at and replaced as needed. Water was being trucked from Slave Lake in the meantime. Utilities manager Lyle Farris said he expected the system to be back on line that afternoon. The cost was estimated at $6,000.

Summer meetings
Council will have three regular meetings in the summer months, with July 26 being cancelled. So the summer meeting dates are July 12, Aug. 9 and Aug. 23. CAO Allan Winarski’s comment on why to stick with the two meetings in August (instead of dropping to one, as was done before) is that there ends up being too much squeezed into that single monthly meeting.

Letter of support to Shaw
Council approved a proposal to provide Shaw Communications with a letter of support for its broadband enhancement project in the area. Explaining the matter to council, Winarski said since the M.D. has already provided such letters to two or three other proponents of similar telecommunication enhancements, this one deserved as much.
Shaw proposes a ‘high-capacity fibre optic transport line from Dawson Creek to Westlock and Boyle,’ coming through the M.D.
Winarski’s philosophy: “Whoever will dance with us, we will support you. Let’s give these guys a shot.”
Council agreed.

Money coming in and going out
The regular M.D. financial update did not contain any startling news. Eighty per cent of expected revenue has been collected, while 20 per cent of the operational budget has been expended. On the capital side, the usual slow start was reported, with only $33,000 spent since the last report. However, several projects are ramping up and the money will start to flow out faster.
Reviewing the cheques from the last period, councillor Darren Fulmore asked why the M.D. had a contractor doing beaver repair work. Too much of it happening in the month of May for M.D. staff to handle, was the answer.

Linear assessment by township
In the interest of finding out whether the allocation of seniors’ housing funds collected from M.D. ratepayers is fair, M.D. admin. had done some analysis. After a lengthy discussion, which we regret to report was extremely difficult to follow, the bottom line appears to be this: it is fair, or close enough. It’s possible councillor Brad Pearson is still not satisfied, but we will leave the explanations to him.

Staging area for North Shore Trail
Councillor Brian Rosche asked if the M.D. administration could help the Woods & Water Recreational Trail Association “pursue a lease,” on a piece of property near Marten Beach for a staging area for the North Shore section of the Trans Canada Trail. Councillor Skrynyk made a motion for the M.D. to provide a letter of support.

Shed for SHARA
SHARA wants to put up a storage shed at the community complex and is seeking the M.D.’s blessing. Also on the SHARA agenda is to place a storage container on the Smith School property, to store cross-country ski equipment. The latter item caused some anxiety among councillors, due to the fact the proposed location is actually on a road allowance. It’s a road that likely won’t be developed, but there’s a principle involved, and council’s policy is to not allow developments on road allowances.
Council eventually passed a motion directing M.D. administration to work with SHARA on both items.
A third SHARA request was for permission to erect an electronic sign listing community events.
“Alberta Transportation would have to approve,” Mike Skrynyk noted.
Council passed a Brad Pearson motion to approve the request.

CAO update: ‘challenging and not dull’
Reading between the lines of Mr. Winarski’s written report on his activities since the last council meeting, it’s obvious there is a lot going on. One small example: After weeding out spam and other non-essential items, he only had 400 emails to deal with. This on top of many meetings and many non-email requests for information, complaints and requests for assistance, not to mention dealing with business arising from the last council meeting and preparing for the next one. Plus routine administration, all resulting in “a lot of over-long days.”
On a brighter note, “work is still interesting and challenging and not dull.”

Eating Creek erosion to get some attention
Council was asked to approve a $47,000 expenditure on engineering for an erosion-control project on Eating Creek, near where it crosses Poplar Lane. Council complied, with a fair amount of grumbling, and a direction to see if it could be added to the ‘deficiency list’ on the Poplar Lane rebuilding project which finished last year.
Councillor Mike Skrynyk’s view was that the erosion mitigation should have been taken care of as part of the Poplar Lane project. Therefore somebody else should be responsible for paying for it. Councillors Rosche and Pearson agreed with him.
“Do the work and send it to (the engineering firm),” said Pearson.
Well and good, said reeve Murray Kerik, “but we can’t make them pay it. That’s the problem.”
However, council agreed with management that the work has to be done. As Skrynyk noted, the M.D. is set to spend $4 million on paving the road, and can’t risk leaving the erosion issue unsettled.
“We can’t afford not to do this,” he said. However, “I want it kept on the deficiency list.”
The spot where the creek threatens to eat away (or maybe already is) at the road allowance is about 80 metres west of the bridge. 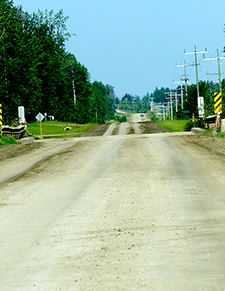 Pavement is coming to Poplar Lane and erosion control needs to be done.

Drug info session in Smith
Councillor Fulmore said the RCMP information session at Smith School was very informative, though the public turnout was not that good. He noted that naloxone – the antidote to fentanyl overdose – is available at pharmacies. Smith School is talking about getting the kits.

Board reports
Airport Authority – Councillor Fulmore reported that a lease dispute with an airport tenant had resulted in a decision by the board to terminate the lease, with 90 days notice. The tenant, whom he did not name, is apparently not complying with the terms of the lease.
In a related note, the board has decided to take a closer look at all properties on airport lands with regard to compliance.
“We don’t want to become authoritarian,” Fulmore said, “but if you don’t do something, then everybody does whatever they want.”