Work on the new waterline (actually lines) on the north end of Main St. in Slave Lake and along Tamarack Road should be starting any day. Town council gave it the final thumbs’ up at its Sept. 5 meeting.
According to the report from project manager Doug Baird, self-managing the project would save the town an estimated $600,000. However, town manager Brian Vance cautioned council that being the general contractor also means “we take all the risks.” In other words, there’s no contractor to go after to fix things if they go wrong. So it could end up costing more, if unexpected things arise.
“We go into it with our eyes open,” he said.
Council approved the job for the price of $1.378 million. It’s to be done in five phases – two of which are lines along Tamarack Rd., ending at 8 St. NE. The M.D. of Lesser Slave River has agreed to contribute $227,000 for its share of the new line (or lines) along the north end of Main St., which will serve M.D. property owners. Baird told council the size of the line into the M.D. will be sufficient to cover what’s there now, but not for much more than that. Vance added that if there’s much growth in the M.D. areas north of town, they’d have to go back to the beginning and install a bigger pipe. The new line up there won’t be enough for fire suppression either, Baird added.
The work is to be done by a local company not named in Baird’s report. It will begin this fall and go as far as the weather allows, resuming in the spring. Baird said there would be some traffic disruption. 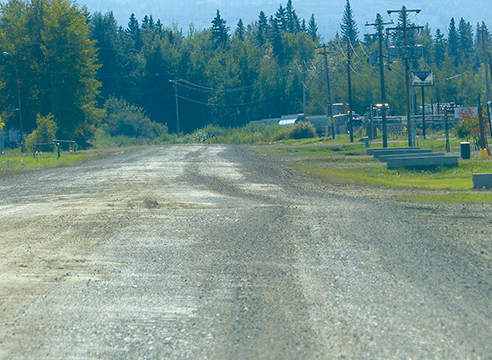 Tamarack Road in the northeast industrial area of Slave Lake is getting a new water line, enough for full fire supression requirements.