Mary Giroux is turning 100 years old on April 6. We’re not sure if that makes her the oldest resident of Slave Lake, but she probably is. It makes her a few months younger than Vera McConaghy of Smith, who was featured in a Leader article last fall, just shy of her 100th.

Mary was born “probably in Canyon Creek,” says her daughter Rose Sound, and lived all her life there and in Slave Lake.

And her secret for a long life?

Mary has five living children (out of 15). They’ll be at the Slave Lake Legion on Saturday, April 7, along with who knows how many grandchildren, great-grandchildren and other relatives and friends to celebrate the milestone with Mary. She’ll be presented with congratulatory messages from the Queen, the Prime Minister and the Premier, Rose says.

Speaking of Royalty, Mary met and spoke to the Duke and Duchess of Cambridge when they visited Slave Lake in 2011. There’s a photo of her chatting with Duchess Katherine on display at the Legacy Centre. 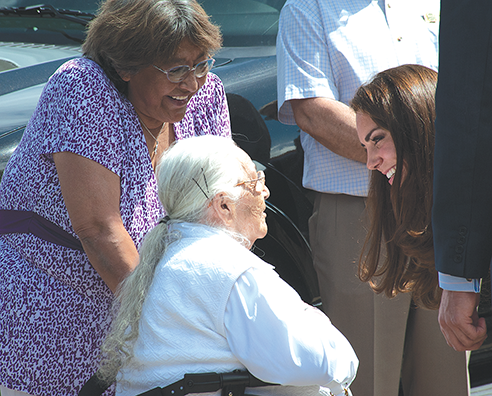 Mary Giroux meeting the Duchess of Cambridge in 2011.