Barb Courtorielle of the Slave Lake Native Friendship Centre informed Chamber of Commerce members last week about the recent re-start of Slave Lake’s overnight homeless shelter, called the Mat Program.
“We opened Saturday night,” Courtorielle said. “We had two guests both nights so far.”
Courtorielle said that is well below the usual number of nine to 15, of the past two or three winter seasons. She is just getting involved again after a break of about 16 months.
Of those former clients – and she expects many or most to show up again – six are seniors with the oldest being 74. The youngest is 19 years old. Five are from Slave Lake and the rest from surrounding communities.
Courtorielle explained, in an interview done after the meeting, that the people that use the Mat Program are usually unemployed and suffering from addictions.
The program is now operating in the basement of the old St. Peter’s Ecumenical Church on 7th St. SE in Slave Lake, where it was for its first two years. The monthly cost of running it is about $7,800, Courtorielle told Chamber members. A big part of that is salaries for two security guards. There’s also an $800 monthly utility bill.
Courtorielle was asked how long she can run the shelter with the funds she has on hand.
“I’ve got about two-and-a-half months,” she said.
A good news item was a recent fundraising breakfast at the Friendship Centre, where $2,200 was raised. Courtorielle told The Leader (in an earlier interview) she’ll be sending out fundraising letters in the near future. She said these letters would be sent to larger oil and logging companies.
Her objective is to secure more funding to keep the program going all the way to April.
“That’s my goal,” she said.
Another aspect of the program she’d like to revive is a stakeholders group. Courtorielle said there hasn’t been a meeting since June of 2016, so expect to hear more about that sometime soon.
The group should meet once more funding is secured. The stakeholder group makes decisions. Their role is to come up with policies, find funding as well as come up with better ways to serve.
Courtorielle also wants to find someone to sit on the Mat Program board. This person will help make decisions, give ideas as well as aid in the quest to find more funding. If you are interested in joining the stakeholder group or joining the Mat Program board you can call Courtorielle at 780-849-3039.
Mayor Tyler Warman, commenting on Courtorielle’s news, praised her efforts in getting the program back up and running. He mentioned that town councillors, meeting recently with provincial government ministers, had “pushed homelessness, looking for some support.”
“We appreciate everything you are doing,” he said.
Courtorielle was asked what Mat Program volunteers would be expected to do.
“In the morning, feed breakfast and sanitize the mats,” she said. “In the evening, greet and feed.”
The shelter does not take children, Courtorielle added. She also said that not all the people who use the service are ‘homeless,’ per se. Some may be passing through and are out of money and in need of a place to sleep. Some are referred by churches, she said, and others by the RCMP.
The Mat Program first started in 2014. It was set up to provide a way to get the homeless off the street and transition into something else. This would allow the homeless to get into addiction programs and other social services programs design to show people how to do a budget and keep a home.
“All we’ve ever gotten in Slave Lake is to the Mat Program,” Courtorielle said. “That’s been going on for four years now.” The Mat Program is just how it sounds. There is a mat on the floor and blankets are provided to keep people warm. Two meals are provided, one when someone arrives and a second in the morning. People who use the shelter have access to hot soup, bannock, coffee, tea and juice. In the morning there are breakfast items available like serial or porridge. There are also opportunities to use shower facilities at the Friendship Centre as well as get lunch. The shelter itself is open for 12 hours but there is no limit on use. “We do not put any time limit on how many times they can come,” she said. 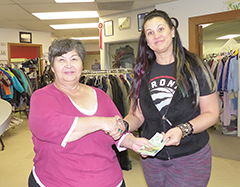 Trina Genowish, right, of the Northern Lakes College Students Association presented a donation of $250 to the Mat Program homeless shelter in Slave Lake on Nov. 24. Accepting the cheque is program coordinator Barb Courtorielle of the Slave Lake Native Friendship Centre. Genowish says the students association held a 50/50 raffle at the Christmas Craft Sale; then winner Laura Eshpeter donated her winnings to the cause.