Slave Lake’s Midget boys’ baseball team has some expectations going into this season. It’s largely the squad mentored through the past few seasons by coaches Dave LaFrance and Kevin Campbell that did its share of winning at the Bantam level. A berth in provincials (one tier or another) seems a distinct possibility.

The coaches got their first inkling of what they’ve got to work with in a trio of games in Edmonton on the second weekend of May. Two wins; then one loss with a lot of errors.

The two wins were over the Northeast Edmonton Padres, by scores of 12 – 3 and 17 – 2. LaFrance says he was pleasantly surprised.

“My initial thoughts were that now we are playing on the bigger diamond that we could struggle with the distances,” he says. “Longer throws, longer basepaths. (But) we were good – fit the diamond well. Hit well as usual.”

Uneeb Khan was the starting pitcher in Game 1 and got the win. LaFrance subbed in a few other pitchers to close out the game.

Matt LaFrance got the start and the complete game win in five innings in Game 2.

“Big hits up and down the line up,” says LaFrance. “Lots of walks from the other team.”

Up against Fort Saskatchewan for Game 3 was a different story. Ft. Sask ended up with the 16 – 13 victory.

“We got up early and our bats went cold,” says LaFrance.” Mixed in a few new pitchers after Will (Chemago) started and with combination of some walks and throwing errors the game got away on us.”

The team had the long weekend off and gets back at it with another round of games in Edmonton this weekend.

“(We) turn the page and work on fundamentals at practice this week,” says LaFrance.

The Heat were scheduled to play their first men’s league game last Wednesday against the Wabasca Blue Jays, but that was rained out. 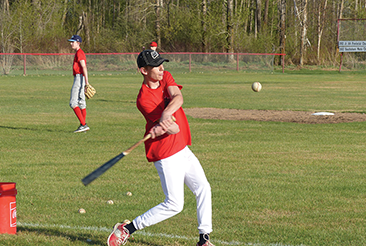 Chase Nehring hits balls at a Midget Heat practice on May 17.