Joe McWilliams
Lakeside Leader
Slave Lake’s Midget Thunder hockey team traveled to Whitecourt on Saturday and escaped with their fourth win of the regular season – 7 – 6.
Although they outshot Whitecourt by a fairly wide margin, the Thunder needed a shorthanded goal by Dominic Wapahoo with 13 seconds left in a wild third period to get the win. They actually trailed 3 – 2 after two periods, roared out with three straight to start the third and then found themselves in a tie in the late going.
Scoring for Slave Lake were Danen Timmann and Ethan Syslak with two apiece, Owen Pearson, Tyrell Barore and Wapahoo. In net, Chase Nehring stopped 21 shots for the win. The Thunder had 45 shots on the Whitecourt net.
This Friday the Midgets host Edson at 8:00 p.m.

Slave Lake’s Bantam boys’ team hosted Wabasca on Saturday night in what turned out to be an 8 – 2 win. The game was quite close – in both chances and score in the first period, but Slave Lake pulled away, beating Wabasca for second time this season.
Kyle Campbell had four goals and two assists to lead all scorers. Nathan Hartman had a goal and two assists, Kayle Dierker had a goal and an assist, Kyler Deleavey had three assists and Brennan Jack and Ethan Baril each scored a goal.
In net for Slave Lake, Brady Courtorielle made 34 saves.
This Saturday, Nov. 25, the Thunder host Athabasca, at 8:00 p.m. Sunday they play Wabasca at Marian Wolitski Arena in Wabasca.
In Pee Wee hockey on the weekend, the Slave Lake Pee Wee 2 Thunder lost 14 – 2 in Mayerthorpe on Sunday. Carter Warman and Ethan Ching scored the Slave Lake goals. The Pee Wee 1 team played in Riviere Qui Barre on Sunday also, but results were not available by press time. 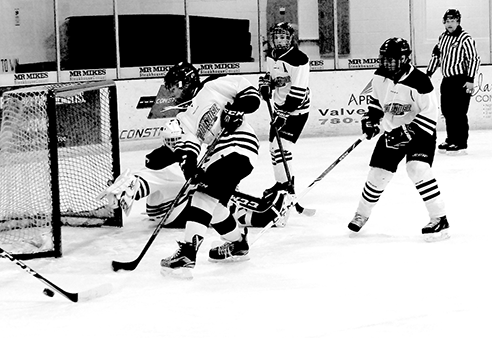