The rec centre in Slave Lake was wall-to-wall hockey on the weekend – most of it being a Pee Wee tournament with nine teams on Saturday and Sunday. The two older age group minor hockey teams played a game apiece, the Midgets at home Friday night and the Bantams in Whitecourt on Sunday.
Midgets
The Thunder hosted Athabasca on Friday night, and from the drop of the puck it was evident Athabasca was not in the same league. They played most of the game in their own end, trailed 7 – 1 after one period and ended up losing 13 – 2.
Thunder head coach Richard Chemago’s blunt assessment: “No fun for either side. Look forward to next weekend.”
Next weekend’s games are Saturday in Wabasca and home Sunday against Hinton
Bantams
The Bantam Thunder lost 4 – 3 in Whitecourt on Sunday, trying but coming up a bit short on a comeback attempt after falling behind 2 – 0 in the first period. Kyle Campbell scored twice for the Thunder, who were outshot 29 – 21. Ethan Baril got the other Slave Lake goal. This Saturday the Bantams play in Edson.
In the Midget blowout win over Athabasca on Friday, three players scored hat tricks – William Chemago, Dominic Wapahoo and Owen Pearson. Other Slave Lake goal scorers were Anthony Beaver (2), Danen Timmann and Matthew LaFrance. Chase Nehring was only called on to make 14 stops in the game.
Atoms
In other Slave Lake minor hockey news, the Atom 1 Thunder played in Devon on Saturday, losing 7 – 4. Scoring for Slave Lake were Jacob Derksen with two, Adrian Mercer and Liam Dierker. Jerzie Green faced 30 shots in the Slave Lake net. This Saturday the Atoms host Athabasca. 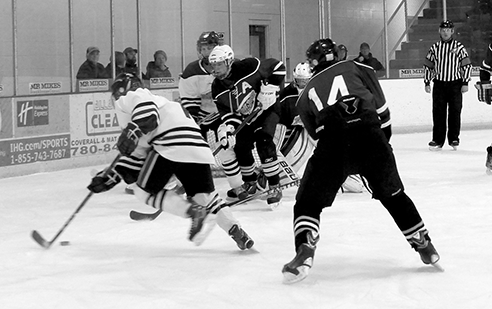 Maybe the most entertaining factor of the Nov. 3 Midget game between Slave Lake and Athabasca was the fact both were wearing Slave Lake Thunder jerseys. The Athabasca team apparently forgot to bring theirs, so they donned the Slave Lake away sweaters. It didn’t do much for their mojo, as they played most of the game in their own end, losing 13 – 2.