Mixed Doubles took over the local curling rink recently. The tournament featured eight teams playing three draws over a two-day period. In a fun format that also included various board game results, the overall winner was the team “Drawing a Blank,” made up of Kennedy Ball and Brandon Rubisch.
The only team that went through the weekend undefeated on the ice were the “Joysticks” comprised of Joyce Robinson and Tyson Nehring. Though their curling skills went unchecked on the rink, they were not so lucky with their board game results.
Next up for the curling center is the annual Ladies Bonspiel, February 16 to 18. Two weeks after that is the Oilmen’s Bonspiel on Friday and Saturday March 2nd and 3rd. This years Oilmen’s is open to any group willing to play and support the group with their charitable endeavours. For contact information on either event call the Slave Lake Curling Centre at 780-849-4641 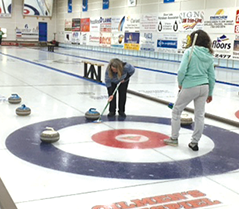