In a crucial matchup this week FOURTH END FREESTYLE and MOR-PORT face off against each other with the result quite possibly securing a spot in the league final on March 19th.

Of note in recent play is the continued improvement of the Falcons, representing the St Francis of Assisi Catholic school. Despite their overall inexperience, great strides have been made and with a few more games under their belt there’s no reason the team can’t have more of an impact in the standings next season.

In Men’s League action, it came down to a coin toss to determine the top two seeds in the standings. Finishing first overall are the SHEET DISTURBERS followed by HAMMERTIME, SILVERTIP and the SHEETHEADS.

With the top four seeds advancing to the second round of the playoffs, the remaining eight teams battled it out in four hotly-contested matchups to see who would carry on in the chase for the league championship with the final set for March 22nd.

First round playoff results had PLAINS MIDSTREAM narrowly defeating STICKS & STONES. The BUSHMEN were triumphant over the WHITECAP LEGION OF BROOM squad. Two-time former champion SNAP ON knocked off THREE ELECTRICIANS while SOME INDIANS & SOME WHITE GUYS outlasted SLAVE SAFETY 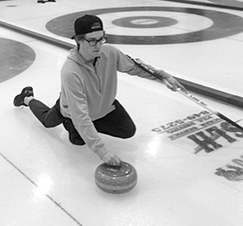