Her family is deeply saddened by the sudden, but peaceful passing of Monique Belanger on June 4, 2017. She will be greatly missed by her family as well as numerous nieces and nephews who developed a close relationship with her over the years.
Auntie Monique was good fun, but “you never wanted to be at the end of her finger!”
Monique was born in High Prairie, growing up in Grouard where she attended the Grouard Mission School for the early years; high school was completed at L’Acadamie Assumption Convent in Edmonton. After this period she completed a Recreational Leadership course in Camrose, and in 1966 was Girl Supervisor at the Desmarais Mission School.
Monique spent her early adult years in Quebec City (1968-1972) where she worked for a time at the Bart School of Business, travelled extensively in Europe and North Africa, and where she met Marc on a train to New Brunswick. They decided to return to Alberta where the economy was thriving.
Marc and Monique lived in Edmonton and later Fort Saskatchewan when David and Sheilagh were born; it was at that time that she earned a Business Diploma from NAIT and soon decided to pursue a Bachelor of Education (Business) from the U of A (1979).
After a move to Slave Lake, Monique taught Secretarial Science (1980-1993) at AVC, now the Northern Lakes College, where she provided substantial motivation and encouragement to her adult students, mostly female, who were about to enter a competitive work force. Monique’s great achievement was not only providing her two children with every opportunity (educational and otherwise) to achieve success, but it was her willingness to mentor the many young women (and men) who were unskilled, disillusioned, or who simply needed a push in the right direction; a push she was only too willing to give.
Monique’s spare time was occupied by a variety of interests: taxation, accounting, gardening, reading, and, with Marc, building a log home that was a multi- year commitment. In David’s words, his mom was the “Matriarch” of the family; it was “mom’s house” and “dad’s shop” and “everyone knew that’s the way it was.”
She returned to education in 2002 where she taught Jr./Sr. High French and Computer Studies at Roland Michener High School, a job she enjoyed for several years until her retirement in 2009. Her retirement was short-lived, however, as she continued to teach many night and summer courses through Adult Education. According to Sheilagh and David, their mom fought for the underdog; she defended and protected her students and was extremely generous with her time and talents, which were many. Sheilagh once asked her mom what she thought her purpose in life was and her response was typically pragmatic: “To help those who need it.” And that she did, indeed. Our Earth Angel; forever loved by all who knew her.
Monique is survived by Marc, her partner of 46 years, son David (Bonnie), daughter Sheilagh, and grandchildren Eden and Corban. She is also survived by five sisters and one brother: Rita Boucher (Gabe), Linda Jamieson (John), Denise Wahlstrom (Allan), Suzanne Belanger (Dermot McArdle), Paul Belanger, Dianne Dallas (Greg). Monique was predeceased by her parents (1985, 2008) and her brother John (2001).

On Angel’s Wings [she was] taken away,
But in [our] heart [she] will always stay. 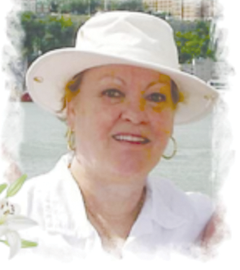