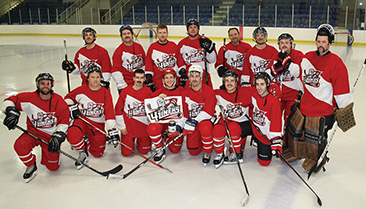 The Fourth Liners of the Slave Lake Rec Hockey League were back at it in the month of November, growing mustaches and raising money for the Movember Foundation of Canada. According to organizer Dustin ‘Stache-ow’ Stasow, the team and its supporters surpassed its record, raising $1,700. “We would like to thank our friends/family for the support, especially Erin Robichaud for her generous donation,” Stasow says. For the record, the Fourth Liners went 3-4-1 in Movember.