Chris Clegg
For the Lakeside Leader

In his 50-plus years of trapping, Clarence Cardinal was not prepared for the shock he received on Nov. 18.
While checking the snares on his trapline near Salt Prairie, he came upon an animal caught in a snare. At first, he did not know what it was, because snow had covered it.
“I thought it was a wolf,” he says.
After getting closer, Cardinal noticed a tail.
“My God, it’s a cougar!”
Cardinal knew the rare cat was in the area, but never suspected he would see the elusive animal. Two weeks earlier, he was checking his traps and noticed its tracks.
“I was putting out my snares and I saw tracks. I said, ‘That’s a cougar,’” he says.
Cardinal, 61, checks his snares every three days and was making regular rounds on Nov. 18.
“It was already half frozen,” he says. “I might have caught it two, three days ago.”
Cardinal estimates the cat weighs about 200 pounds.
“It took three of us to load it into the truck,” he laughs, after noting he dragged it out of the bush with his quad.
Cardinal caught the cat about five kilometres from Duane Nichols’ place. He is still surprised with his catch.
“I’ve never seen one in the wild,” Cardinal says. “It’s the first time I saw a cougar on the trapline.”
Cardinal will be contacting Fish & Wildlife, as required by law. He hopes he gets to keep it.
“It was as nice surprise,” he says.
And what would he do with the cat?
“I’d like to eat it,” he says. “The hindquarters I heard is good eating. I heard it’s the best meat.”
And if it’s not too expensive, he’d like to have the rest or part of it mounted.
Cardinal has no reservations about continuing to trap, despite the fact there are big cats prowling in the area.
“I’ve been out there all my life,” he says. “No worries.”
The cougar is not the first rare animal Cardinal has caught. Last year he trapped a rare red coyote.
Who knows what elusive animal Cardinal will catch next?
fea 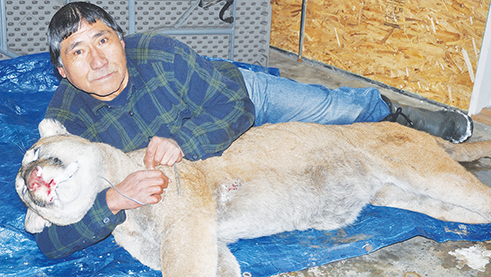 Clarence Cardinal with his catch; he figures it weighs about 200 lbs.