The New 2 U thrift store re-opened for business in Slave Lake last week, with a new owner and a totally new look. Stacy George is now the proprietor, having taken over from Joyce Kern on May 1.
“I’ve never owned anything like this before,” she says. “But I’m a thrift store junkie!”
“She keeps Slave Lake Buy & Sell in business!” says her friend and New 2 U volunteer Lorraine Martin.
Martin was one of the people who rolled up their sleeves and helped a lot with the cleaning, sorting and rearranging that George wanted done before re-opening.
“She sorted baby clothes for a week!” George says. Her kids helped too, as did other, unnamed, volunteers.
The transition from Kern to George may have set some kind of speed record.
“I asked Joyce (this was in late April) how she was going to run the business alone. She said she wasn’t – she was selling. I said if I had the money, I would buy it, ‘cause it’s right up my alley.
“Joyce said she would finance me herself. Within 20 minutes we had a deal and the next morning we were signing papers.”
George says the rearranging and sorting started even before the May 1 takeover date.
“Joyce was really good,” she says. “She let me do whatever I wanted.”
New 2 U is open 10 – 5, Tuesday through Saturday. It’s located in the little plaza on 1A St. SE in Slave Lake, next to Treatz R Uz, the pet grooming store.
As for what’s there – a lot of clothing, some books, some jewelry, shoes, housewares and more. A lot of it comes from donations, George says. She also buys stock.
One thing George wants to continue is Kern’s tradition of helping out the women’s shelter and Victim Services with clothing for their clients.
“In the summer I plan to have a barbecue and donate at least half the proceeds to the women’s shelter,” she says. 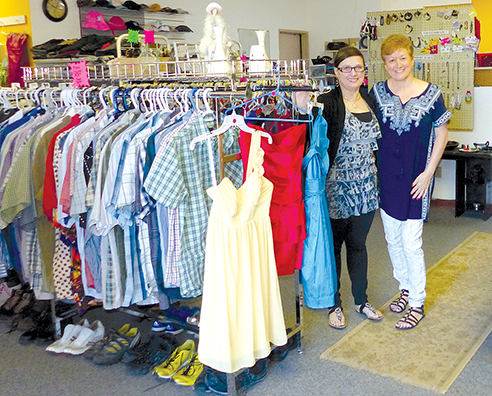 New 2 U owner Stacy George, left, with her friend and helper Lorraine Martin.