For some, Robyn Perkins might be a familiar face to people who have visited the Lesser Slave Lake Bird Observatory and Boreal Centre.

But for those who don’t know, Perkins is the new head bander for the Observatory, as longtime banders Richard and Nicole Krikun say goodbye to the Observatory and slave Lake to start a new journey in Sherwood Park Alta.

Perkins has worked as the assistant bander for the past three summers along side the Krikuns.

“Now I’m in charge and it’s kind of scary, says Perkins.”I have got some massive shoes to fill.”

Perkins explains she has always been inclined to nature and really discovered her love for birds after touring the Boreal Centre and attending the Songbird Festival with her mom as a child.

“I remember watching them band and extract the birds, thinking wouldn’t it be so cool to grow up and do that.”

After Perkins graduated high school she attended Augustana Campus of the University of Alberta located in Camrose where she got her bachelors of science degree in environmental science.

Perkins says there is no school course you can take for banding. She explains banding is kind of similar to a trade where you apprentice underneath someone who already has their permit and license.

Perkins says she worked under both of the Krikuns; as well she had worked at the Beaver Hill Bird Observatory outside of Edmonton and the Prince Edward Point Bird Observatory in Ontario for two years.

Perkin has also spent three months in the Hudnan province of China in doing research on the bushtit bird.

“They look similar to the chickadee in size, but some are grey in colour and some are bright orange in colour.”

Perkins says her favourite thing about being a bander is working outside.

“you can’t beat my office, especially in the summer.”

Perkins adds she enjoys talking to the public about birds and the public interaction.

“I get a kick out of it when I can tell people something they don’t know and hope they can take it home with them.”

Perkins spilt the beans that when she is banding a bird she will tell people that it is her favourite bird so all the visitors can say “awe, wow we got to see the favourite bird!”

Perkins says she does not actually have a favourite bird.

“It is hard to choose. I think there would have to be categories for best looking, best song, best behaviour, etc.”

Perkins also adds she will be taking Nicole’s place in writing articles for the newspaper in hopes to keep Nicole’s readers reading.

“I just hope I can take on and accomplish what Nicole and Richard have done at the Observatory.” 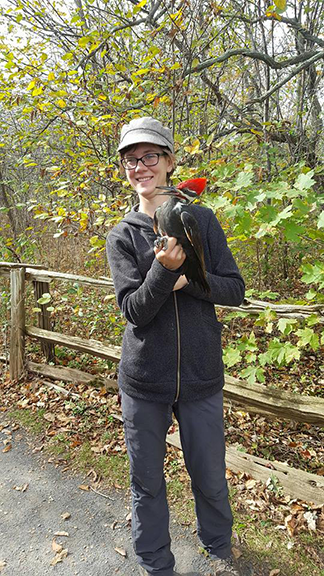 Robyn Perkins, the new head bander for the LSLBO, with a pileated woodpecker