It’s full speed ahead for Riverboat Daze, as far as new Slave Lake & District Chamber of Commerce President Frankie Giroux is concerned. Minutes after she was elected to that position in a special meeting last Wednesday, Giroux was at The Leader talking about how much fun this year’s summer festival is going to be.
“We’re having a block party on Friday night,” she says. “I think everyone’s really excited about it.”
That would be Friday night, downtown Slave Lake, after the parade.
Parade? On a Friday evening?
“It’s been revamped,” Giroux says.
Has it ever. Closing down Main St. for a street party after the parade is something new as well, although perhaps not unprecedented. At the time of the interview, the Chamber did not actually have town council authorization to do that, but Giroux sounded pretty confident.
“We’ve gotten letters of approval from all the businesses,” she says.
The block party as planned includes lots of prizes for the kids, live music, a costume contest and other fun stuff, such as “50-plus vendors.” (That would be the number of vendors, not their age.)
What that leaves for the rest of the weekend is a kids’ carnival, the fair (or midway, if you prefer) and the sandsculpture competition on Devonshire Beach.
Getting back to Giroux, she agreed to run for president of the Chamber after Brittany Giesbrecht decided to step down. Giroux had served as vice president since February of this year. Stepping into the VP role is Kimberly Hughes of Distractions.
Giroux is a CPA and part owner of the accounting firm Nash Giroux LLP. As to why she got involved in the Chamber of Commerce, she says, “I’m passionate about supporting the business community. I think banding together is important and I believe in community involvement and awareness.”
Awareness?
Many businesses focus, understandably, on their own success, Giroux says. But the community as a whole makes for a good economy and being aware of that and working together to improve things is a good thing.
Another Chamber event that’s coming up before Riverboat Daze is a business mixer, which is this Wednesday, June 7 at The Fix downtown. The next general Chamber meeting is Monday, June 26 at 11:30 a.m. at the Slave Lake Inn & Conference Centre.
“We do have vacancies on the board,” Giroux says. “Call me or Laurie.” 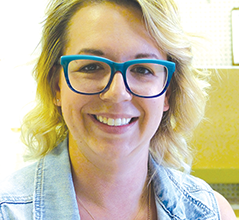