The food services at the Slave Lake Inn and Conference Centre seems to be picking up as a new manager came in last last year.
Tony Giesbrecht is the executive chef and owner of Tony’s Customs Catering, who has taken over the contract of the Forage Dining Room and the Timber House Sports Bar. Giesbrecht and director of food and beverage Walter Trebilcock sat down for an interview with The Leader to talk about the venture.
Giesbrecht said he is trying to bring a dining experience in Slave Lake that has never been here before. He calls the experience elevated “hospitality.”
He feels he offers an exceptional food and beverage program that may not have existed in the hotel or community before.
“We’re trying to really give people the best possible products and services for a great cost,” Giesbrecht said.
Trebilcock explained that Giesbrecht goes to great lengths to provide elevated hospitality. His efforts include going out of his way to find local ingredients to cook with. The ingredients are either brought in from all over Alberta or the rest of Canada.
These ingredients include chickens from Morinville, Pine Haven Pork and Winding Road 183 cheese from Smoky Lake, AB.
“He’s really searching out and bringing in people and highlighting some of the food with his (Giesbrecht) rustic talent and upscale cuisine,” Trebilcock said.
Giesbrecht said that elevated hospitality also includes training his staff to take an interest in the customers. He feels that if staff don’t take an interest customers will not take an interest in his restaurant. Showing interest includes servers trying to build a connection with a customer and finding common ground. His serving staff has tried every item on the menu so they will be able to make recommendations if needed.
“We want this to be a restaurant for the community,” Giesbrecht said.
Giesbrecht went into some aspects that differentiates his restaurant from others. He said doesn’t think there is another restaurant that has a full-time pastry chef. The restaurant brings in bones to make stock and soups. Everything is made from scratch. Even staff training is done from scratch.
Giesbrecht brings with him 20 years experience and Trebilcock has up to 35 years experience in the food service industry. Giesbrecht first got into the industry after he graduated in 2001 out of nessessity. He went to British Columbia to go to music school and worked in a kitchen for four to five nights a week to pay for schooling. It caught his interest to the point where he stayed during the summer months.
This was a restaurant called the All Seasons Cafe. It was a similar establishment to what he is running now.
“I’ve been fortunate enough to work with great people who are good at what they do,” Giesbrecht said.
Trebilcock added that Giesbrecht graduated from the Culinary Arts Program at NAIT.
Giesbrecht went through the differences between the Forage Dining Room and the Timber House Sports Bar. At Forage, he aims for an upscale rustic cuisine. This means taking food items people are comfortable with and give them a bit of a swing while not changing it to the point where it scares people. He gave the example of his caesar salad where he lightly grills baby romaine lettuce to make a warm salad. The croutons and dressing are all homemade.
When it comes to the Timber House the idea is to take traditional bar food and make it more upscale. 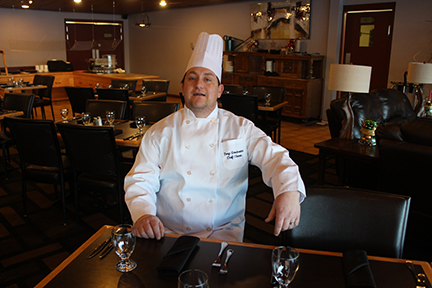 Tony’s Custom Catering is now in charge of the bar and restaurant in the Slave Lake Inn and Conference Centre. Pictured here is Tony Giesbrecht, the executive chef and owner of Tony’s Custom Catering, sitting at one of the tables in the Forage Dining Room. His company is also responsible for the kitchen at the Timber House Sports Bar and the different ballrooms at the hotel.