SL Ford is now Revolution Slave Lake Ford, after a change in ownership that became official last week on Jan. 2.
But despite the name, don’t expect any sudden changes.
“Business as usual,” says Lionel Robins, a member of the Revolution Auto Group, a company based in Grande Prairie.
The only change for the time being is that former owner Doug Babiy is gone, and Chad Babiy continues as the managing partner. Robins says it’s a good arrangement for the ownership group, who are all for continuity as long as things are running well.
Discussions about the sale started about a year ago. Robins says his group had purchased Monahan Ford in High Prairie about a year-and-a-half ago, and through “mutual connections,” got to know Doug Babiy. He was thinking about retiring, and they started talking about it.
“He chose us,” Robins says.
What Babiy liked was Revolution’s commitment to community involvement. Robins calls it a pillar of the company philosophy. In fact what he was doing last Thursday was interviewing each of the employees and encouraging them to get out into the community and do some volunteering.
“Any who do 40 hours a year get an extra week’s paid vacation,” he says. “And it has to be specific and significant.”
Community involvement as a matter of policy has worked well in other communities where Revolution owns auto dealerships. The company has been growing steadily over the past few years, even in tough economic times. It started with a Mazda store in Grande Prairie in 2006. A Kia store was added, also in GP, followed by a Honda dealership in Fort St. John. The GM dealership in High Prairie came next, and then the Ford in the same town.
As for where the ‘Revolution’ name came from, Robins says it was “almost by accident.” The Honda store in FSJ was called Revolution, implying the revolutions of an engine.
“We made a lot of changes and customers started saying, ‘This really is a revolution!’ So we got the idea from that.”
It’ll be some time before the new sign is up out front of the dealership in Slave Lake. Robins says Ford has control of that process and it will probably take at least three months. 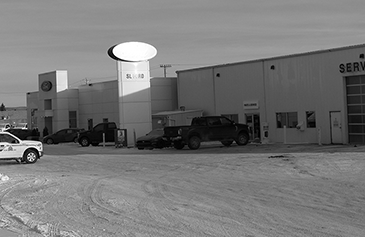 The Revolution is here! But not the sign; that’s going to take a few months.