Library in the midst of creating adult workshops

The Rotary Club of Slave Lake Public Library just brought a new recruit on board, her name is Suzanne Wilson and she is the new program co-ordinator.
“This is my second week,” she says. “It’s all really new but everything so far has been exciting. I’m really enjoying myself.”
Wilson’s job entails looking over all the weekly activities that happen over at the public library. She says right now nothing too new is in the works, as September is a rather hectic month.
“October we are having our annual haunted house and maybe a Halloween-themed family party,” she says. “For right now though, we are transitioning our ‘youth night’ to three times a week and giving it a more after school programming feel. I’m also working on creating a new toddler program for Fridays and hoping to get going on some adult stuff. There are a lot of things in the works!”
Before taking over the program reigns at the library, Wilson was working at the local Staples as a sales support lead.
“I heard about the position at the library by word of mouth and I thought to myself ‘why not, I don’t want to work in retail forever’ and applied,” she says. “It’s been well worth it and I couldn’t be more excited.”
Wilson says she’s always open to suggestions and hopes to hear from the community.
“I always love hearing ideas!” she says. “We are doing it for them and would like to get any feedback I can from patrons.”
To contact Wilson, call 780-849-5250 or via email at [email protected] 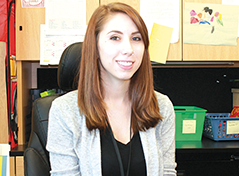 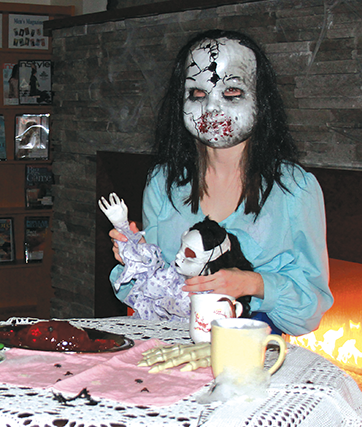 A creepy doll scared The Leader during the 2016 haunted house hosted by the Rotary Club of Slave Lake Public Library.