Local massage therapist Mercedes Berger from Health Within in Slave Lake is now a certified yoga instructor after completing the 200-hour yoga teaching program. Berger didn’t initially take her yoga training course with teaching in mind. She says she took it for herself, to learn more about yoga and meditation.

“I didn’t decide I wanted to teach until about a few weeks ago after doing some practice hours,” says Berger. “I just kind of fell in love with helping people through their practice.”

Being a massage therapist, Berger says, she is helping people all the time, adding that is what she thrives on.

Berger mentions she was not surprised that all of a sudden she wanted to teach yoga. She says she did her training right in town at Slave Lake Yoga with Lori Whitby. She adds the class worked well for her because it was spread out over the course of eight months.

“It [the course] seemed too fast, but if you think about it eight months is a lot of time.” She says the course had a small class size of eight people, making it a more intimate setting.

Berger says she enjoys all kinds of yoga. Her favourites include Hatha, a form of flow yoga that gets people moving and their blood pumping. Yin involves deep stretching, strengthening the body. She says Yin also involves holding poses anywhere from three to five minutes. Restorative yoga is a slower form, aimed at getting into deep tissue muscles and further relaxation.

Berger states her favourite pose is any of the warrior poses because they make her feel tall and strong.

Berger says she’s glad she took the class with Whitby because she really focuses on being safe and inclusive. she adds she also teaches the basics of the poses to get everyone into a comfortable position that can benefit them.

Berger adds she has also talked to Whitby about getting on the schedule for the new year to teach some classes.

“Right now I’m pretty flexible so anything to get my foot in the door to help out and to help me practice would be great.” 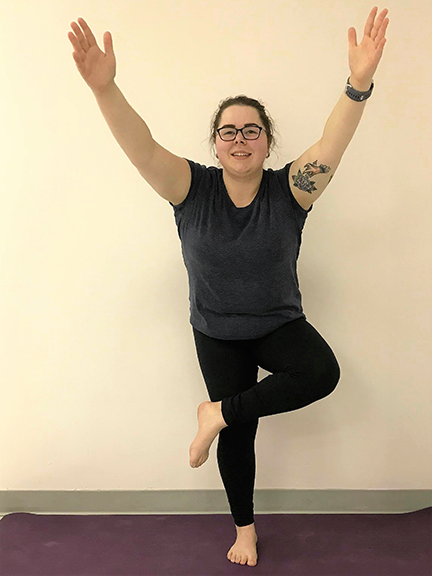