The Town of Slave Lake has a plan to do pavement and sidewalks on a worn-out, ‘L’-shaped piece of 5th St. and 5th Ave. NE this year. The question before council at its April 18 meeting was how to raise the money to pay for it.
The local improvement levy formula calls for 45 per cent of the cost to be borne by benefitting landowners. That would double some of their tax bills, warned town project manager Doug Baird, presenting the report.
One of the alternatives Baird presented was to cap the levy at $30 per metre, which would raise $96,000 (as opposed to the $427,000 that would be raised in the 45 per cent scenario), or about 10 per cent of the estimated cost.
Mayor Tyler Warman wasn’t a big fan of this approach, because he said since the residents could still petition it down, the town would likely go ahead and do the job anyway and be left holding the bag for what would normally be he residents’ portion. Others thought it was okay.
Last year, council had considered – and seemed prepared to go ahead with – abandoning the local improvement levy concept entirely. In place of it was suggested a system by which all residents pay a road rehab levy, year in and year out. From this money, roads would be fixed up according to a priority system and what could be afforded. However, for whatever reason, that proposal languished and was never approved.
Until last week.
One advantage of the general levy is work could get done as funds permit, without the jobs getting petitioned down. That has happened, with the result the streets just got worse.
Warman said, “it’s a better way – a certain amount not tied to assessment.”
Councillors Mark Missal and Phil Lokken said they didn’t like it.
“So what do we do,” asked Warman, “if it comes in $96,000 short (because it’s petitioned down at the $30/metre rate)? Do we shelve it?”
“It’s a problem with democracy,” said Lokken.
Councillor Brice Ferguson suggested “stretching” the capital plan to reduce the per/year costs.
“Some are in pretty bad shape,” countered Baird.
“You could wait until they turn to gravel,” said Vance.
Council eventually went with the general road levy, which means the directly benefitting folks on 5th and 5th will pay a lot less than they would have under the local improvement levy system; every one else in town will contribute their share as well. The motion passed by a 4 – 2 vote.
A second motion was to proceed with the actual work, which passed by a 5 – 1 vote, with Missal opposed. 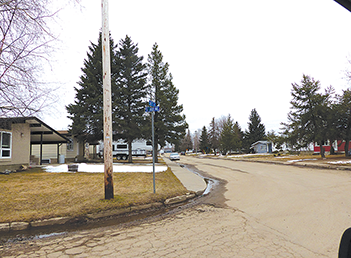