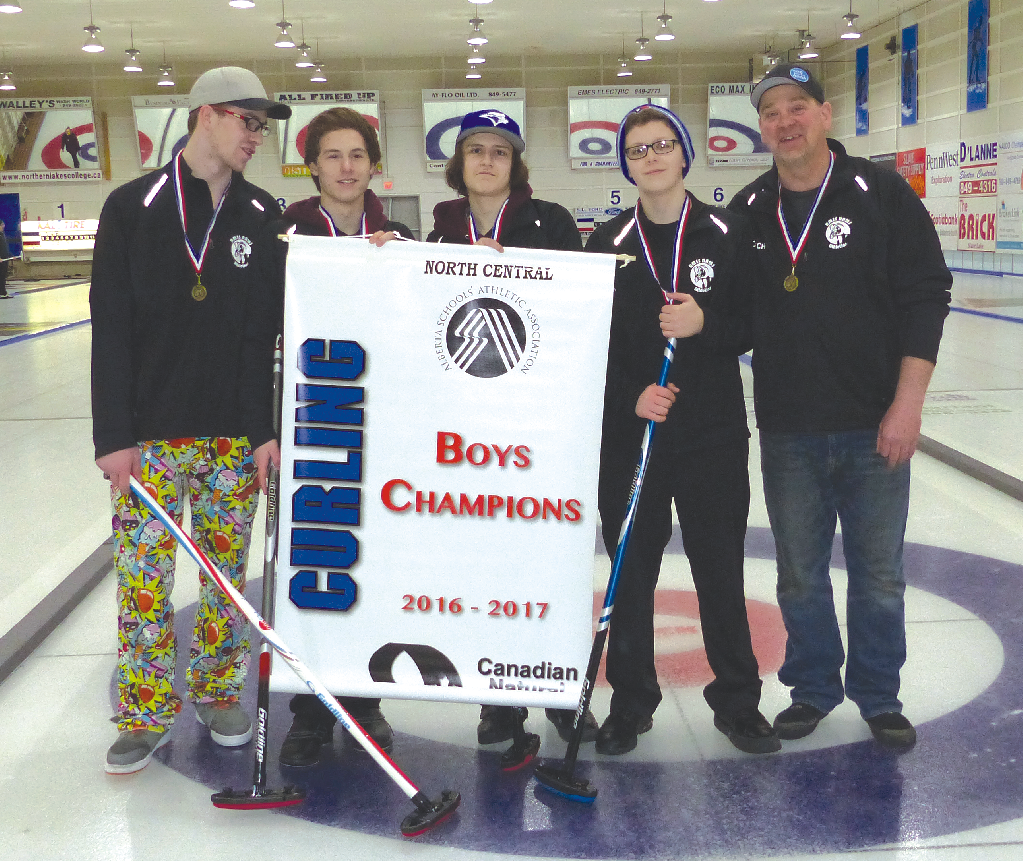 Those who didn’t stop by the Slave Lake curling rink Friday and Saturday missed some excellent curling by high school teams. On the other hand, the place was packed!
What brought out the fans was the competition to see which teams would advance to the provincial high school curling championships, which happen this week in Lethbridge. Teams from schools in the North Central Zone took part – which includes Athabasca, Westlock, Barrhead, Whitecourt and others. Slave Lake hosted, and had teams in the Boys, Girls and Mixed categories. All of them did very well, advancing to the final. The Girls and Mixed rinks ended up with silver medals; Max McGregor’s Boys team surprised nobody by winning its third trip to provincials.
But it wasn’t easy! In fact, the boys trailed 4 – 0 after three ends. Needing something big to happen to get back into it, that’s exactly what they pulled off. Skip McGregor made a clutch final shot in the fourth to score five and they were right back in the middle of it. With team members Parker Hay, Joel Girard and Austin Hay running and gunning and sweeping like champs, they battled down to the end and – in classic fashion – it came down to the last rock. The R.F. Staples boys (from Westlock) had curled an excellent game and facing three or four Slave Lake rocks on his final stone, the skip put a red one right in front of that cluster of blue stones. It left McGregor with a tricky but make-able takeout; he needed one to tie and two to win and he aced it, actually scoring four.
“The one in the fourth was tougher,” he says.
Two years ago, the McGregor-skipped Roland Michener rink won bronze medals. Last year they were fifth.
“Better this time, I hope,” he says.
The silver medal-winning girls team lost 11 – 5 to Barrhead Composite. Skipped by Taylor Rubisch, it included Lucy Pearson, Randi Morissette and Kennedy Lukan. Carter Kuhn’s mixed team lost to RF Staples in the final. His teammates were Nallie Dyck, Judy Dyck and Cruz McGregor, with Cory Derkoch in reserve.