The third annual Outlaw Sled Drag Races event on Lesser Slave Lake near Slave Lake was a big step up from the 2017 edition. According to Ellen Criss of the host organization – Slave Lake Snow & Mud Association – there were over twice as many competitors as at the second annual.

It was “perfect weather,” Criss adds. “Not too hot so the track didn’t break down too much, and very little wind.”

Racing were people from as far away as Brooks, Alberta and Hary River NT. There was a large contingent from Fort McMurray; also racers from High Level and lots from Grande Prairie and Whitecourt. They competed in several classes, including Youth (eight kids), 200 – 500cc, Stock and open classes in three different engine sizes, Mod, Vintage, King of the Hill (anything goes). Lorne Bulldog from High Level won the latter event, taking home $1,000.

Criss says the most popular classes were 800cc stock and open, with 17 or 18 racers in each. Two qualifiers from each heat moved on. Sixty per cent of the registration fees for each class was paid out. The highest for one class was $1,080.

A couple of locals got into the winners’ circles. Matthew Monaghan won the ‘Vintage’ class, and Eric Shaw was a winner in the 800cc Open category. Other winners were from High Level, GP, Fort Mac and Chard.

The grub station featured smoked barbecue ribs by Adam Gongos – so popular, says Criss, “that they were gone by 2:00 p.m.!” Synergy Aviation provided helicopter rides all day, stopping only to fuel up.

“Many volunteers and sponsors to thank for contributing to this event. Long term goal for SLSMA is to build and maintain more trails for off-highway vehicles, to create a staging area for riding, and to expand events to include mud bogging.”

The association had its annual general meeting this week on March 26. Its next event is the 8th annual Slave Lake Poker Run – an ATV rally – on June 2. 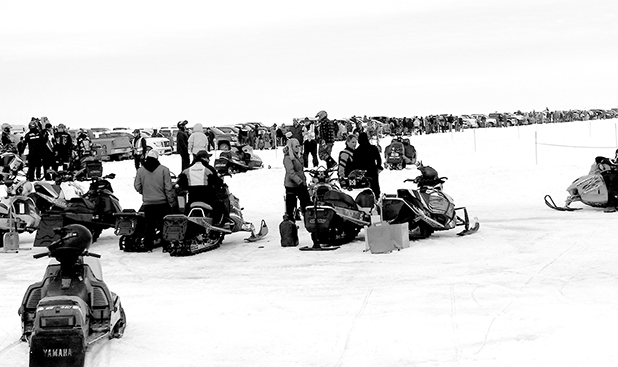 Sledders get ready to race as spectators line up to watch them in the March 17 Outlaw Sled Drags.