Things are stretched a bit thin at the Town of Slave Lake Community Services department these days. Program coordinator Jill Shepherd, for example, has been spending most of her time filling in as rec facilities manager position, left vacant when Derek Starnes decamped a couple of months ago.
Taking up some of the slack in programming is assistant Josie Murray, who sat down with Shepherd to provide The Leader last week with what’s coming up in the next while.
Paint Night
“Kids’ Paint Night is Dec. 1,” says Murray. Former town employee Taylor Tonsi is looking after this event, which in the past has had a good turnout. She’ll be leading participants through a painting exercise, held at the multi-rec centre (MRC) on that Friday evening.
“She did one in October and it turned out very well,” Murray says.
Cookie decorating
Another crafty event for the kids is ‘cookie decorating,’ held in conjunction with the All Seasons Market on Saturday, Dec. 9.
“Something free for the kids,” Shepherd says.
Skating party
The very next day (Sunday, Dec. 10) is something called Canada 150 Skating Party, which is being held to celebrate and ‘unveil’ the new Canada 150 mural mosaic in the Tervita Arena. It’ll be 4:00 p.m. to 6:00 p.m. and include hot chocolate and cookies.
The mural mosaic – like the one that hangs in the lobby of the MRC and the one formerly displayed (before it burned down in 2011) in the town office lobby – is a project of St. Albert artists Phil Alain and Lewis Lavoie. Made up of dozens (maybe even hundreds) of individually painted squares, it adds up to an overall picture on a certain theme. This new one is an ice-fishing scene. Shepherd says many of the squares were painted by Slave Lake students and seniors.
More free skating
Moving along in the month of December, Shepherd says there’s lots of free public skating in the week between Christmas and New Year’s Day. The MRC is closed on Dec. 24 and 25 as well as Jan. 1. On the days it isn’t closed, there’s free skating from noon to 2:00 p.m.
“Thanks to a lot of local businesses,” Murray adds.
Walking track covered for seniors
Local businesses and groups are also to be thanked for covering the cost of seniors using the field house walking track through the winter months. They include ATCO, Eco-Max, Servus Credit Union, CJ-CSM Inspection and the Landon Persson Memorial Fund.
“All the way through to March,” Murray says.
Power walking, etc.
Getting back in gear in January will be the Power Walking (at CJ S School) and Tumble Tots (at St. Mary of the Lake School) programs. Another one, called ‘DancePl3y,’ will “likely” be revived in the new year as well, Shepherd says. ‘Home Alone,’ and babysitting courses will be started up again as well.
What else?
Frost Fest
“Frost Fest,” Shepherd says. “It’s February 10 to the 19th.”
Lots of details are yet to be nailed down and that’ll happen at a Dec. 4 meeting. But it’s known that the week of winter activities starts with an indoor family carnival at the field house on the Saturday (Feb. 10), and ends on the long-weekend Monday with the traditional Family Frolic in the Park. Things known so far to be additional to last year are a Stage North children’s performer (on Sunday, Feb. 18) and a ‘fat bike’ demonstration by the Slave Lake Bicycle Club at the park on Feb. 19. There’ll be lots more to do and be take part in, Shepherd promises.
Beyond that, not much for 2018 has come into focus yet. There’ll be another Spring Break Camp, Shepherd says.
Field house divider
In other news, the field house divider should be installed in December. This will allow more flexibility in that space, since some rentals only require half the field house; so with the divider in, both halves can be used at the same time for different activities. Murray says installation is expected to take five days, during which the field house will be closed.
That will affect indoor minor soccer, which is a big user of the field house in the winter months. Lots of drop-in programs are going on there as well.
“Right now basketball is very popular,” Murray says. “Badminton is always popular too, and schools use it” 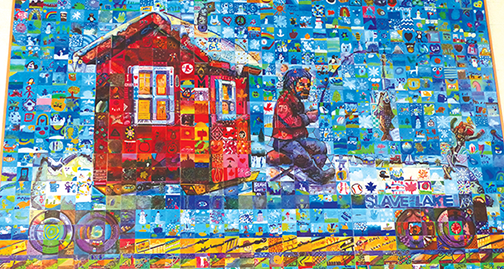 The new mural mosaic at the arena; its official” ‘unveiling’ party is on Dec. 10.