Victoria B.C. blues rocker Jesse Roper and his band played to an appreciative audience of approximately 210 at the Legacy Centre in Slave Lake on Jan. 21. It was the fourth of seven shows in the current Stage North Association’s concert series. Opening up for the Roper band was Slave Lake’s own Ian Rossiter and the Hot Club of Zama.
Comments from some of the attendees, gleaned from the Stage North Facebook page, appear below:
“This was a heck of a concert! Jesse Roper is indeed a blues guitar god with a most entertaining stage presence. And, man, what a tight, tight band! The way Jesse ended the concert by bringing Chad up on the stage was brilliant. And let’s give Chad praise for his air guitar! I think this was one of Stage North’s best concerts ever. I also thought that Ian Rossiter was great. Hilarious guy! I hope you bring him back again. Well done, Stage North, well done.”

“I can’t lie. This was another amazing show put on by Stage North!! I agree that Ian Rossiter guy can sure pick a strang and that other guy Philip Willier looked pretty classy in his white shirt?? Jesse and his band stole the show.. which is impressive for a headliner… but for a group with that much talent..?!!! Pure enjoyment! Will likely end up getting season tickets if these are the caliber shows that we can expect in the future! This is a gem to have in our own town, and anyone who isn’t taking advantage of these shows is missing out!!! Very impressed!”

“What a fantastic evening in Slave Lake! From the opening act to Jesse Roper’s amazing talent and Chad bringing down the house to end the night – amazing! Oh and Greg’s ribs were delicious.”

Next up on the Stage North Concert Series calendar is the Christopher Hall Comic Orchestra, on Feb. 18. Hall somehow combines comedy with classical music. 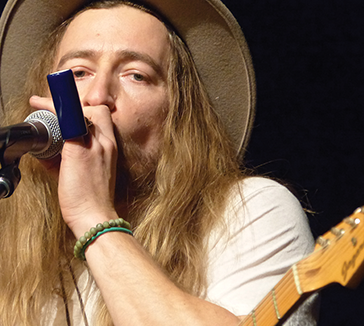 Jesse Roper takes a break from slide guitar and wails on the harmonica for a bit during one of his numbers at the Legacy Centre on Jan. 20.