Sea Gems Oyster Bar is an outfit in Slave Lake that may sound like an eatery, but isn’t. It’s what Mary Anne Bingley calls her home-based business in cultured pearls. She likes jewelry, loves pearls and has been in this particular line of work for about a year.

“It’s through a girl in Taber called Melissa Broderson,” Bingley says. “She brings in the product from China.”

The ‘product’ is vacuum-packed individual oysters, each of which had been producing an oyster for about three years prior to harvest. Bingley says how it works is the oyster farmers implant an irritant about the size of a grain of sand in the young oyster. As in a natural setting, the oyster protects itself by coating the irritant with layers of nacre. Bingley says the colour of the resulting pearl can be influenced by various factors, including what the introduced irritant is, the depth in the ocean the oyster is located, and how much it is open.

So why offer pearls still in the oyster, as opposed to just pearls?

“It’s like Christmas,” she says, “You have no idea what you’re getting.”

This is apparently part of the appeal for customers. Bingley has them pick their own oyster, knowing only that a pearl of some kind is in there. Once they’ve done that, she pries open the shell, extracts the pearl, washes it in salt water and dries it for them.

Why? Because it’s for them only.

Many customers will have her mount the pearl in a piece of jewelry – say earring or a pendant. She also displays necklaces and other items at her market booths. She’ll be at the All Seasons Market in Slave Lake, for example, on March 31. Also at upcoming farmers’ markets. 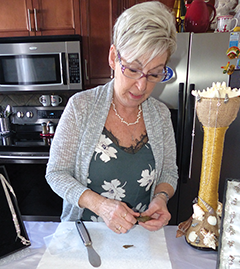 Mary Anne Bingley of Sea Gems Oyster Bar prepares to pry open an oyster to see what sort of a pearl it’s been growing. 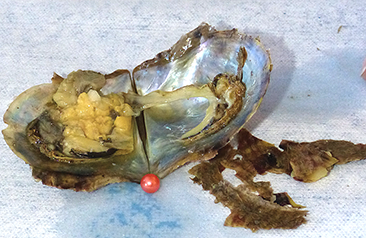 The results: an orangey-pink cultured pearl.