Longtime Slave Lake resident Stella Boisvert passed away on July 30 after a short battle with illness. She was a few months shy of her 90th birthday.
Boisvert – born in 1928 to Widewater residents Paul and Hettie Alexander – moved to Slave Lake from Kinuso in 1955 with her husband Leo. They had bought a store from Leo’s uncle Gene, located more or less where the ATB is now. It grew into what became known as Boisvert’s Super A, a local fixture for 48 years. The building that now houses the Abundant Life Worship Centre and the Lakeside Outreach School was Boisvert’s store.
Stella was being remembered last week for her positive influence on many aspects in the life of the community over six decades; family and business on one hand – on the other a remarkable record of volunteerism and philanthropy.
“Everybody knows what a great person she was,” said Pat Kanzig of the Slave Lake Hospital Auxiliary group. “She was a founding member.”
A founding member and a tireless volunteer for that organization over 50 years, serving in every position. She also served on the hospital board, the ambulance board, with the Royal Purple, read to schoolchildren, supported the Rainbow Society and the Animal Rescue Committee, which a member said “she was instrumental in helping us to create.”
All that, plus a long and mostly unsung record of supporting the arts in Slave Lake – whether musical theatre, dance or otherwise.
“She loved music – went to every concert,” says one the people involved in musical theatre, adding that at times Stella almost singlehandedly kept the musical theatre group afloat.
Boisvert was twice recognized with Slave Lake’s highest awards for volunteerism. In 2008 she was named Citizen of the Year at the volunteer appreciation event at the Slave Lake Native Friendship Centre. In 2010 she received the Lifetime Volunteer Award. The write-up in The Leader noted her volunteering “started 50 or more years ago when she helped the district health nurse deliver babies!”
Stella reflected on her reasons for volunteering in a contribution to an Edmonton Journal story on the topic in 1998: “Why do I volunteer? I really get a lot of satisfaction and a sense of fulfillment. Plus helping my community to be a better place.”
Stella grew up in Widewater, where her dad Paul was a commercial fisherman and (with his wife Hettie) a mink rancher. In Pioneers of the Lakeland, she recalls her first school – a one-room structure midway between Canyon Creek and Widewater, with Dorothy Moore as teacher.
Stella married Leo in Kinuso in 1947, where he was in business with his dad Benny. Their first two children – Terry and Lynda – arrived when they lived there. The next three – Laura, Dennis and Jim – came along after the 1955 relocation to Slave Lake. Slave Lake – it should be noted – had three or four hundred people in the mid-1950s. Leo became mayor around 1960 and served for 13 years, overseeing the hectic transition from sleepy little hamlet to boomtown with the discovery of oil in 1964.
A celebration of Stella Boisvert’s life will be held on Friday, Aug. 11, at 11:00 a.m. at the Legacy Centre in Slave Lake. The family has asked that in lieu of flowers, donations be made to the Animal Rescue Committee of Slave Lake. 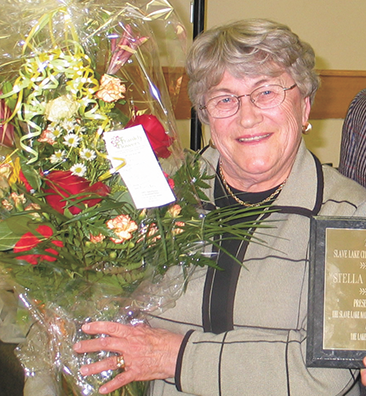 Stella Boisvert, on the occasion of her Citizen of the Year award in 2008.