Thanks to the Town of Slave Lake’s Project Manager Doug Baird, The Leader has a better grasp of the route of the regional water line project. Not to mention the process of PVC pipe-fusing, the reasons for the varying use of open-trench and directional drilling along the route and other project details.

Baird took The Leader for a tour of the entire length of the pipeline route last week, starting at the Slave Lake water treatment plant. The pipeline will reach that point via a long bore under the airport from the right-of-way next to Kal Tire. From there it runs along the back edge of the industrial properties adjacent to the airport, takes a sharp left out to Caribou Trail and a sharp right just before the industrial properties resume on the west side of Caribou. That part is all done by directional drilling, meaning no trenching, if we have it correctly. The line then heads west through a new cut through the bush to Sawridge Road. It follows that road all the way out to Five-Mile Hill, then crosses under the highway and carries on above (south of) Hwy. 2 to a point roughly opposite Nine Mile Point. That’s when it dives back under the highway and heads straight down to Southshore Drive, turning west again to run along the south side of the road to the Widewater Complex. It’ll be drilled under the road and railway tracks there and hook up with the pipe coming out of the pump station on the grounds of the complex.

Baird says the pipeline should be in the ground and ready to go in May of this year. A process of fusing the sections of PVC pipe is going on along the Sawridge Road section right now – although on the tour the fuser machine was broken down. Baird says the company is bringing in more of those and will have three working at once. It heats the ends of the two pipe sections to a specified temperature, presses them together at a specified pressure, then cools the joint at a specified rate and temperature. The result is a joint that should be as strong as the pipe.
Baird says there will be around 1,240 pipe fusions along the 17 km. route. 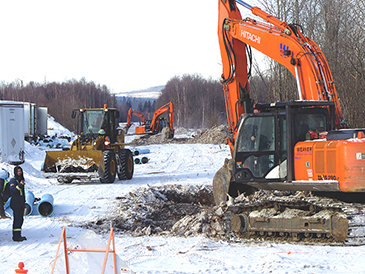 A trio of hoes at work on the water line route on the west side of Slave Lake. 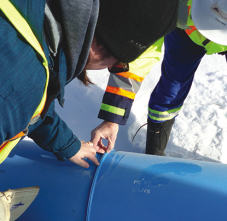 Checking out a fusion joint.