Home Uncategorized Pouring it on: falling off a ladder leads to new art hobby

Carol Maitland broke her arm earlier this year. That wasn’t good for various reasons; one was that she couldn’t keep doing the ink drawings she loved so much and had gotten quite good at.
“It’s called Zen-tangle,” she says. “Then I fell off a ladder and I couldn’t do it anymore. I was so upset!”
Wanting something to do in the meantime, the Slave Lake woman went looking for ideas online and came up with an art form call ‘acrylic pour painting.’ It looked like something somebody with an injured arm might be able to do.
“The more I watched, I got excited about doing it,” she says.
Starting out with what she calls “dollar store” materials, Maitland began experimenting. That was a few months ago, and it’s probably fair to say she’s fallen in love with it. It results in the fairly quick and easy creation of all sorts of fantastic shapes and designs – all without much in the way of arm movement.
“All you do is stir and pour!” she says.
That’s the basic description. There is lots of fine-tuning in how much paint, in what combinations and even how much stirring is involved. The trial and error nature of it is probably half the fun.
There are actually three components to the ‘paint’ mixture that gets poured onto the canvas. Paint is one of them; the other two are a ‘medium’ and silicone. The latter two of these result in shapes appearing on the canvas called ‘cells.’ Applying heat afterward can make more of these appear.
Maitland demonstrates a pair of what she calls ‘dirty pours’ for this reporter. Although made from pretty much identical sets of ingredients, the two resulting canvases are quite different.
“It’s kind of like magic,” she says. “My grandkids were just enthralled.”
Maitland is hoping to interest other people in the area in pour painting. She’s more than willing to pass on what she’s learned.
“It’s very relaxing,” she says.
Maitland welcomes phone calls from interested people, at 780-849-3019. 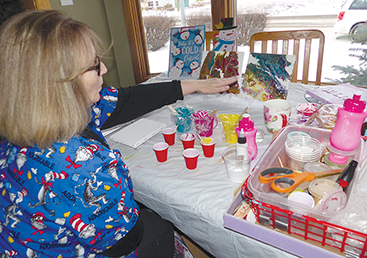 Carol Maitland at her painting table, showing a couple of recently finished acrylic pour paintings. The first step is to mix up some paint….. 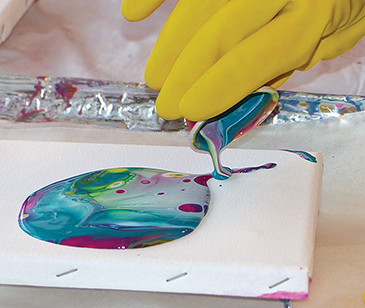 Step 2: pouring the mixture onto the canvas. 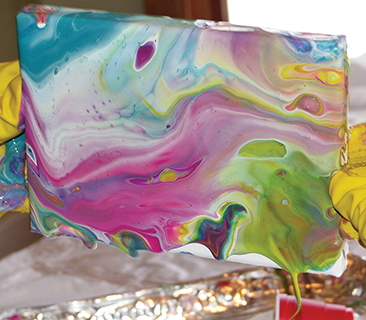 Step 3: Move the canvas around and see what develops. 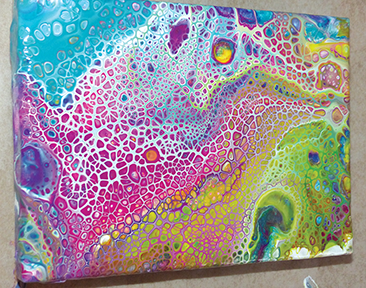 The final product, after the application of a bit of heat from a propane torch.