A local gym is hosting a power-lifting competition in Slave Lake on June 3. Champions Health and Fitness is teaming up with 100% RAW Powerlifting Federation to put on the “fully sanctioned” event at the Champions gym in the Lakeland Centre.
“This means that world and national records can be broken,” says a release on the meet.
How likely that is remains to be seen, but according to Champions there is a local 16-year-old lifter who stands a good chance of setting a world record, and a couple of others who have a shot at provincial and national records.
“We are very excited to be bringing this to Slave Lake, and hope it can become an annual thing for the northern region,” says Champions manager Chantel Campsall.
There’s a limit of 40 competitors, and as of the date of the release (May 12) there were already 24 signed up, including six from the Crossfit gym down the street.
“Crossfit Slave Lake has been a huge supporter and contributor to this event,” says Campsall.
Registration is open right up to the day of the event (assuming the cap hasn’t already been reached). The competition itself will be broadcast live on Facebook.
Champions owner Abdul Mouallem says: “I have seen us as a community be very supportive and encouraging to each other and we hope that this experience continues as our culture in this gym.”
For more information, contact Champions Health & Fitness at 780-805-8488. 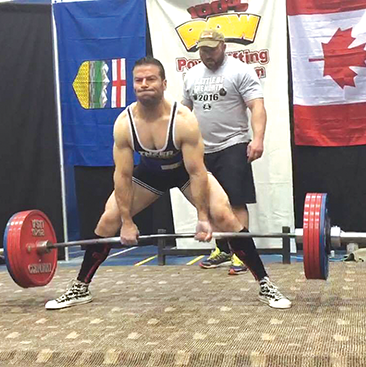 Khalil Mouallem of Slave Lake, competing in a powerlifting event in Spruce Grove in 2016.