Len Ramsey
For the Lakeside Leader

Brenda Draney attended Roland Michener back in the early 1990s and has gone on to become a renowned Canadian artist. She won the Royal Bank of Canada’s Canadian Painting Award in 2009. In 2016 she was finalist for the Prairies and the North for the Sobey Art Award for the top contemporary Canadian artist under age 40. This award afforded her an exhibition at the National Art Gallery of Canada and an interview on CBC’s “Ideas” radio broadcast. Her work has been shown at numerous galleries throughout the country including an exhibition at the Art Gallery of Alberta (A.G.A.) in Edmonton. She just completed a large installation called “Trapline” at Grant MacEwan University.
Until the beginning of December, Brenda will be working at an artists’ retreat in the small community of Joe Batts, Fogo Island, Newfoundland. The retreat was the brain child of Zita Cobb, a multimillionaire tech executive, who returned to her home at Fogo Island to create the Shorefast Foundation. The foundation encourages cultural resiliency in the small community by bringing artists from around the world to share their work and knowledge with the community and visitors who stay at the Fogo Island Inn.
Brenda is staying in an old cottage with views of the ocean on three sides of the house. It’s self-contained with running water, solar panels, heated with both wood and electric, a large claw-foot bathtub, and Wi-Fi. She works in a studio built on stilts that matches the architectural style of the Fogo Island Inn in that both could be used for scenes in a sci-fi movie.
In response to a question about whether she was lonely living in such as remote location, Brenda replied, “no.” Recently, she’d been to dinner at the home of an ex-restauranteur and on another night, attended a shed party where people play such instruments as the guitar, spoons, the fiddle, accordion and bodhrán. They sing and drink and entrance is by donation.
Brenda stares out at the ocean’s immensity and wonders about the worldview of those who grew up near the water. She says that her worldview was very much shaped by growing up in Slave Lake. Her close friends at university were all from the north. When she was asked to create an installation for Grant MacEwan, she said she wanted it to be a work of art that would help connect students coming from the north with their new home. She hopes that it will “ground them to a place that fortifies them.”
Brenda makes her home in Edmonton because she says it’s closer to her northern roots. It’s like a “temple of the familiar.” People keep her real when she gets on the wrong foot. She says she “can’t BS anyone from Slave Lake because they’ve known you since Grade 3.” It’s like being “on terra firma.”
She says that growing up in Slave Lake was “psychologically heady.” Young people get labelled and then it’s very hard to change that label. She recalls one student who was considered unattractive and then returned after a summer looking decidedly the opposite. Her reputation didn’t change. Another Roland Michener alumnus who worked with Brenda on her exhibition at the A.G.A. talked to her just like they were back in high school.
Overall, Brenda says she didn’t like high school but she loved university. She says that she felt stupid in high school because she had a lot of difficulty in math. In Grade 12, she dutifully followed her guidance counsellor who advised that she should take a 30-level math to help her with applications to university. To her surprise, her math teacher, said, “It’s not that you’re unintelligent. You’re just not trying.”
As an artist, Brenda says she can’t be satisfied with her work. In support, she quotes the words of dancer Martha Graham, by heart: “No artist is pleased. There is only a queer divine dissatisfaction, a blessed unrest that keeps us marching and makes us more alive than the others.”
She’s been told by a curator that she admired the risks Brenda takes in her work. Growing up in a small town, she says has given her a fresh worldview. She feels that students from Guelph University put out some great “deconstructionist” landscapes that tend to all look alike. Like so many northern artists, Brenda’s art reflects a unique perspective and technical prowess.
Brenda says that, at times, being an artist can be hard, especially if there are no big projects on the horizon. Right now, she has a show in Ontario that’s going onto Washington. Plus, she’s doing the artist-in-residence gig in Joe Batts. But, she’s always hustling to pay the rent and sometimes motivation can be hard. Fortunately, she’s got her Slave Lake story that always needs telling and the perspective it provides to make sense of these turbulent times. 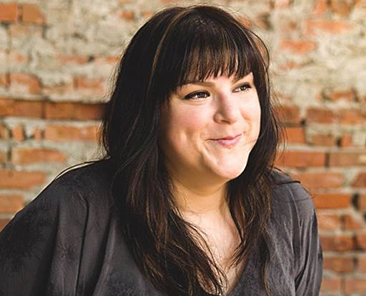 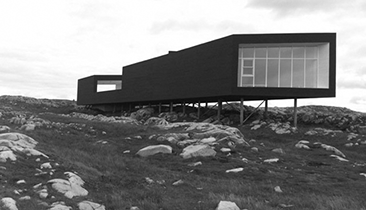 One of the artist’s studios on Fogo Island, Newfoundland.