Home News Residents learn about drug use and prevention

Experts provided information about the drug problems of the day and what is happening locally to residents.
The information session took place on Dec. 7 at the Roland Michener High School gym in Slave Lake. There were presentations from the RCMP, physicians and Alberta Health Services (AHS) Addiction and Mental Health. It was facilitated by Slave Lake Victim Services and the main drug that was covered was fentanyl.
Constable Cory Tillmann with the Slave Lake RCMP said that fentanyl is an opiate. The drug is more powerful than other opiates such as morphine. Fentanyl first came onto the scene in the 1950s and it was used by the military to treat wounded.
Tillmann said the drug’s pure form is obtained in China. From there it is produced into the product that can be purchased on the street. This work is done in illegal labs. The drug is purchased in China because it is readily available. In China fentanyl is a controlled substance. There are few regulations and it can be purchased on the Internet.
Fentanyl in its pure form is a white powder. After production it is a green pill. Fentanyl can also be mixed with several other drug, such as caffeine, heroin, cocaine, methamphetamine and marijuana.
Tillmann explained there are so many deaths because of the production process. If fentanyl is not mixed properly with a cutting agent, pills with too much pure fentanyl is the result. This is called a hot spot. He equated it to mixing chocolate chips in cookie batter. The chips do not mix evenly.
“It poses a danger to everyone who comes into contact with it, not just police,” he said.
Just being in the same room with pure fentanyl is enough to cause effects. The drug is skin permeable. Tillmann advised that if you see white powder in a room to not enter and call for help. The lethal dose is two milligrams.
Signs of an overdose include slow breathing or not breathing at all, blue fingernails and lips, choking or throwing up, gurgling sounds, cold and clammy skin and the person unable to be woken up.
There is a way to counter overdoses and exposure with a Narcan noloxone kits. Police are equipped with these kits. A fentanyl overdose death is not immediate. It occurs over one to three hours. If you apply a noloxone kit the person goes from appearing like they are sleeping to waking up.
Tillmann said there are laws in place that will allow people to call the police for help during an overdose and not be charged for possession. This is the Good Samaritan Overdose Act. This law does not protect you from trafficking charges.
Physician Majeed Fowad said prevention is the best defense for kids. He told parents to encourage their kids not to use drugs and to keep in contact with them because drugs can destroy you physically.
He warned that naloxone is not a sure counter to an overdose. There are cases where a user does not respond to noloxone when using carfentanyl, a much stronger form fentanyl.
Physician Frank Akwa warned that if you stop breathing and you starve your brain of oxygen the effect can be irreversible.
Akwa explained that some users can be lucky when it comes to using a drug mixed with fentanyl. They can notice that something is different but not everyone is so lucky.
Fowad said that fentanyl in one of the legitimate uses is administered as patches. The patches are given to people who are terminally ill and the doses are safe. Akwa added that the physicians are careful on administration.
Trina Napier of AHS Addictions and Mental Health said anyone can come to AHS to get treatment. You can just come on your own or be referred. AHS helps both with people with addictions as well as the people close to them.
The services are all voluntary and the anyone who wants the services must take it upon themselves to show up to meetings. If the person is over 18, he or she has to phone in themselves. No one can do it for them. If the individual is under 18 someone else can phone in and get them help. Everything is confidential and the services are free.
Napier explained that drug use becomes a problem when the user continues to use the drug despite it causing trouble in their life.
Treatment involves reducing use over time. The hope is that the use is reduced to the point where the person can stop using. AHS also focuses on relapse prevention.
“We create goals with clients,” Napier said.
Napier said that youth today are using alcohol and marijuana. She expressed concern that cocaine use is increasing in youth. She said this is odd because cocaine is not a popular drug with youth.
“It’s a little bit surprising for me,” she said.
Napier said if someone needs help they can call the crisis helplines, 1-866-332-2322 for addictions and 1-877-303-2642 for mental health. Local numbers are 780-849-7127 for addictions and 780-805-3502 for mental health. 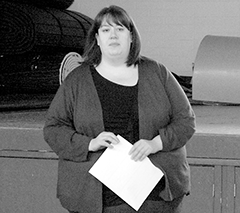 Trina Napier of AHS Addictions and Mental Health speaks at an information session about drugs.